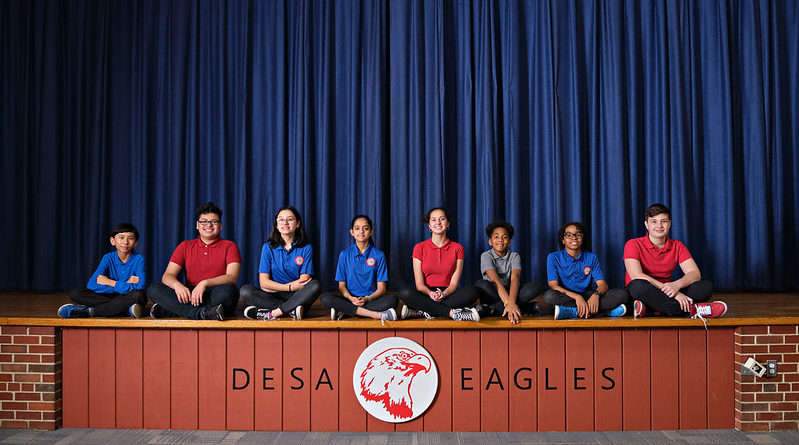 Come November, Dallas voters will likely have a lot more on their ballots besides choices for U.S. senate, house, and president — Dallas ISD will ask voters to approve what could be the largest school bond package in state history, too.

And a lot will go into this bond package. In January, school board trustees heard about plans for one chunk of that prospective ask — a new approach that would see $40 million of a possible $3.7 billion package earmarked for a holistic approach to improving the district’s most at-risk campuses by improving outcomes for entire communities.

That portion would turn schools into community hubs that would directly address their unique needs. Some might have legal services and health clinics. Some might have police substations. Still others might address food deserts by providing co-ops.

“Those driving this idea — Dallas ISD’s executives, its Racial Equity Office, and the Child Poverty Action Lab (CPAL), which is one of the district’s nonprofit partners — champion it as a way for a local government to fight the toxic effects of redlining, which linger more than 80 years after the federal government directed banks not to loan to communities of color and the poor,” wrote Matt Goodman, with our sister publication D Magazine. “If the board—and taxpayers, when it’s up for a vote in November—approve, public dollars could pay for infrastructure that might house a grocer or a clinic or a therapist located on or near public schools on district land. It could pay for a librarian to keep the library open after hours or expand after school programs to meet demand. It could retrofit space for pro bono attorneys to consult families who are facing eviction.”

During the briefing, Superintendent Michael Hinojosa said he expects to ask the board to allocate $40 million to $50 million for this effort. They’ll also need some help from partners like the city of Dallas, DART, Dallas Housing Authority, and many others to help implement these solutions.”

Tuesday’s board briefing included an update from the 2020 bond committee on how some of the rest of that $2.7 billion to $3.7 billion ask would be allocated, and while trustees seemed to be OK with many of the plans, some questioned priorities that saw only three older schools being replaced, when the district had previously identified 15 campuses that were ending their useful lives. 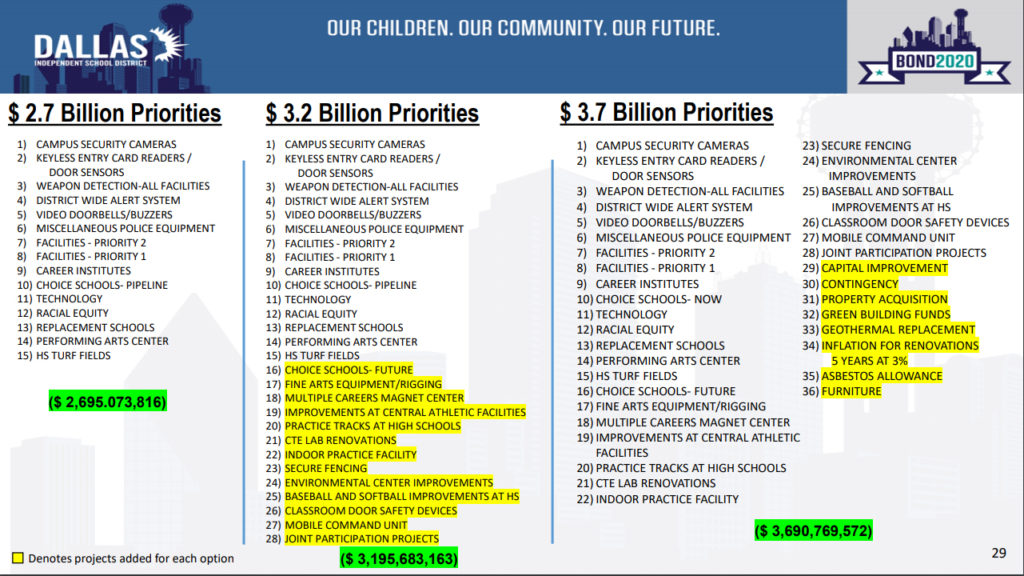 “We know it’s not perfect by any means, but it serves as a starting point,” said assistant superintendent of operations Scott Layne, who added that what was brought to the board in Tuesday’s update wasn’t so much a recommendation, but a look at some of the district’s pressing needs. Superintendent Michael Hinojosa told the board that this was the first look at a working document.

“We’re barely getting to halftime,” he told the board. “There’s a lot of opportunity to take your feedback, and make adjustments. This isn’t even our first recommendation or our first draft. We’re just bringing you an update at this point.”

“This process as a whole was designed to be collaborative,” said Owusu. “A lot of people have invested their own personal time in late-night meetings.”

But first, the good news: None of the options before the board would mean an increase in the district’s current debt service tax rate of 24.2 cents per $100 valuation.

A downtown Montessori school is looking at a $100 million allocation in the proposed bond package. The new school would eventually serve grades pre-K through eighth, but at its initial opening this fall, it would be home to pre-k through second grade. The school will open in August at the University of North Texas building at 1901 Main Street, where the school will be housed on the third and fourth floors of the building. Officials are looking for a permanent location for the school, and hope to have that facility ready by 2024.

About $572 million is proposed to upgrade buildings across the district, including improved access for those with disabilities, new roofing, and other aging equipment. A little more than $270 million will be allocated for expanding the district’s school choice program, including STEM schools in far North Dallas and in the Medical District. The district could also opt to allocate $120 million or so to add a Montessori campus in Pleasant Grove, an International Baccalaureate school in Oak Cliff, and potentially redo five other existing campuses, changing them into specialty schools.

Four career institutes that would provide specialized instruction in several specific careers, including construction, plumbing, and cybersecurity, would get a $235 million chunk of the bond.

About $130 million would be spent on indoor practice facilities at five high schools that can be used by sports teams, bands, and cheerleaders.

The next step for the district? Holding community meetings to gather public input, starting in March. After the community meetings, the advisory committee will likely bring its first draft of recommendations to the board in May, with the second draft in June, more community input in July, and a final draft in August. 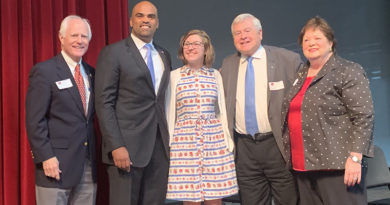 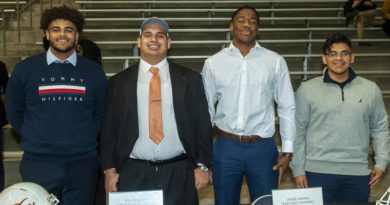