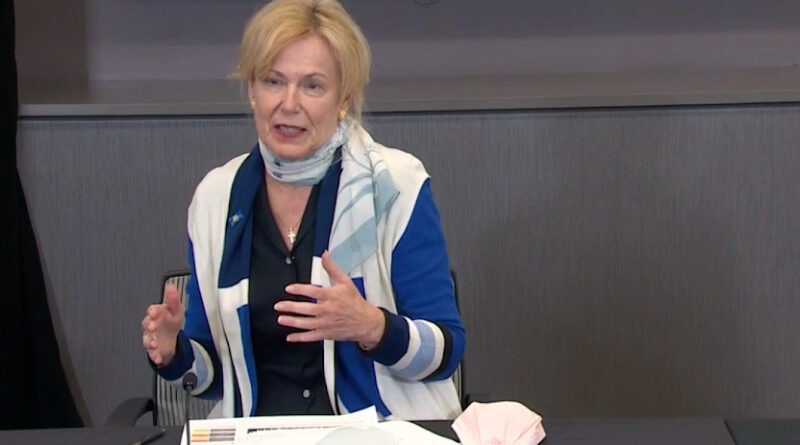 With new positive cases of COVID-19 hitting all-time highs, and local and state officials grappling over who should control the response to the new surge, it can be difficult to keep track of all the new information coming in by the minute. Here are today’s bullet points:

Not long after addressing a crowd that was expected to be at least a couple of thousand people, Vice President Mike Pence joined Gov. Greg Abbott for a press conference at UT Southwestern to reiterate – among other things – the need to continue to practice social distancing.

Pence first addressed members of First Baptist Church in Dallas as part of its Celebrate Freedom Sunday, standing with an unmasked choir behind him and an audience mostly sitting shoulder to shoulder.

Pence wore a mask in public throughout his trip, with the exception of when he was speaking.

“Working with your governor, we will put the health of the people of the Lone Star State first, and every single day we’ll continue to reclaim our freedom and our way of life, as each day we are one day closer to the day we put this pandemic in the past,” Pence told churchgoers. “And when we do, with this governor and this president, we’ll bring Texas and America back bigger and better than ever before.”

Afterwards he, along with fellow White House Coronavirus Task Force members Dr. Deborah Birx and HUD Secretary Ben Carson, joined Gov. Greg Abbott at UT Southwestern to discuss the state’s response to the pandemic, and the recent surge in cases.

The four also met in a closed-door meeting to discuss the surge and the state’s needs. Pence later said he and Abbott also discussed the need to seek guidance from local health officials when crafting policy regarding COVID-19.

“President Trump wanted us to be here today with the developments over the last two weeks with the rising positivity and the rising number of cases with a very simple message and that is to you, the people of Texas: We’re with you,” Pence said. “We’re going to stay with you. We’re going to make sure that our health care system in Texas has the resources, has the supplies, has the personnel to meet this moment.”

Pence indicated that while the current extension of community-based testing sites might be short in duration, the White House was open to extending the program as long as necessary.

“Frankly, in consultation with the governor, and at the urging of both of your senators, we’ll be extending that every bit as long as Texas wants us to,” Pence said. “This is all hands on deck. We’re going to make sure not only do we continue the testing at those five sites, but the governor needs additional public resources to expand testing. That will be made available.”

Pence and Birx also praised Abbott’s plan to reopen the Texas economy after the shelter-in-place orders. Abbott is under fire by some who say he opened some businesses far too early, and that he skipped steps his plan outlined, such as waiting for the recommended almost two weeks of declines in several benchmarks.

“I want to commend the governor for your decisive action reopening this economy,” Pence said.

“It was a very serious and safe opening plan, and you can see the impact of the opening plan and how it worked out,” Birx said. “All of May, for almost five weeks, and then there was an inflection point.”

It was an observation Pence also made.

“About two weeks ago something changed,” he said.

Abbott said that cases were quite low in the days surrounding the first two phases of the reopening plan, categorizing the daily new case counts as some of the lowest the state had seen during the pandemic. Abbott said that the state’s positive case rate had dropped from around 4% at one point in April, down from a high point of almost 13.86%. He said that a sustained trend above 10% would be a “red flag.”

“We need to understand COVD-19 has taken a very swift and dangerous turn in Texas over the past few weeks,” said Abbott, who also said that despite the increase in cases, the state still had the second lowest death rate among the most affected states.

Last week, Abbott took action to close bars once again, and reduce capacity at restaurants back to 50%, something Birx praised.

Pence also stressed the importance of listening to local health officials, practicing social distancing, and working to protect the elderly and those with underlying health conditions.

Birx said that an increased rate of Texans younger than 40 being hospitalized with complications from COVID-19 was worrisome, but what also was concerning was the possible indication that younger people are more likely to be asymptomatic.

Pence said if younger people are concerned about their potential exposure, they should get tested regardless of whether they have symptoms. Both Pence and Birx recommended younger people avoid older relatives and older friends.

“We know now there’s scientific evidence that masks both keep you from infecting others but may also partially protect you from getting infected.” – Deborah Birx

Abbott, Birx, and Pence all stressed the importance of wearing masks.

“The governor and I talked (last) week. We talked about the importance of people, in this moment, of calling on people across Texas to wear a mask,” Pence said. “It’s an important message. We’re here to convey it.”

“I know that roughly half of the state is under local ordinances, strongly recommend that if your local officials in consultation with the state are directing you to wear a mask, we encourage everyone to wear a mask in the affected areas,” he added. “When you can’t maintain social distancing, wearing a mask is just a good idea.”

“I’m really appealing for every Texan to wear a mask,” Birx said, adding that she’d like to see 100% compliance. “We know now there’s scientific evidence that masks both keep you from infecting others but may also partially protect you from getting infected.”

After announcing a record high 570 new cases Sunday, Dallas County Judge Clay Jenkins sent a letter pleading with Abbott to implement a mandatory face covering rule statewide, and to consider allowing counties to enact their own “Safer-At-Home” orders as necessary.

The letter, which was sent Saturday via email, asked Abbott to issue new “Stay Home, Stay Safe” orders for 30 days, or to give counties hardest hit by the recent surge the ability to do so on their own.

“I made my peace early on during this crisis to always follow the science and our public health experts,” he wrote. “I recommend that you enact these requirements statewide, or at the very least, regionally. If not, please rescind your prior order restricting local control and allow Dallas County to implement the above recommendations in an effort to slow the spread of the rampant and devastating COVID-19 virus. Lives depend on swift actions.”

Jenkins’ letter recommends, among other things:

“Please do not wait for these actions to take place. Read the letter and act as if they have taken place in conducting your own affairs,” Jenkins said in a separate statement Sunday. “Do not go to the type of establishments that our public health doctors are saying are unsafe. Stay at home except for essential business trips and wear a mask when outside the home and around other people.”

A total of 1,627 new cases of the novel coronavirus were reported by Dallas County health officials between Friday and Sunday, and an additional 18 deaths, bringing the county’s total cases up to 20,165, including 352 deaths.

“Today is the first day of a new week and we start with a new record of 570 COVID-19 positive cases,” Jenkins said Sunday. “The more important number is hospitalizations, which has doubled this month and is the best indicator of the wide community spread we are experiencing.”

“Each of us has an important role to play. Wear your mask whenever outside your home and whenever within six feet of people outside your home,” Jenkins said Friday. “Avoid crowds and go only to places where masks can be worn 100% of the time. If the establishment you’re going to is a place where it is not possible to wear the mask 100% of the time, such as a restaurant, choose the take-out option during this time of increasing spread.

“Wash your hands frequently, take hand sanitizer for those times when you don’t have access to soap and water, and keep at least a six foot distance from people when out exercising.”

The county said that the average number of COVID-19 hospitalizations, which had been around 300-350 for several weeks, hit an all-time high Friday at 571 patients. Emergency room visits also continued to increase, representing about 29% of all ER visits, according to information reported to the North Central Texas Trauma Regional Advisory Council.

Of cases requiring hospitalization, more than two-thirds have been under 65 years of age, and about half do not have high-risk chronic health conditions. Diabetes has been an underlying high-risk health condition reported in about a third of all hospitalized patients with COVID-19.

UT Southwestern’s latest forecast projects an increase of 50% to 80% in hospitalizations by July 6. By July 6, Dallas County hospitals could see concurrent hospitalizations from COVID-19 increase to between 530 and 800 cases, the forecast said.

It also predicted that cases would average 700 per day by July 6.

“An increasing proportion of COVID-19 cases in Dallas County are being diagnosed in young adults between 18 to 39 years of age, such that of all cases reported after June 1, more than half have been in this age group,” the county said. “Over 31 confirmed COVID-19 cases in children and staff have been reported from 18 separate childcare facilities in Dallas County since June 1, with additional reports of associated illnesses in family members of affected children.  Increasing outbreaks of cases are continuing to be reported from multiple large social gatherings since the beginning of June.”

Close contact or community transmission continues to be the biggest risk factor for contracting COVID-19,  accounting for roughly 90.3% of all cases. Living in a long-term care facility, being incarcerated in the county jail, and working in a meat or food processing plant are a distant second, and third, at 3.6% and 2.8%, respectively.

Of the testing done, positive cases accounted for 26.9% as of June 20, with 1,120 positives coming from 4,157 tests.  Testing and positive test results of COVID-19 far outpaces any other respiratory virus – even if you combine them all.

Thirteen percent of all cases ended up hospitalized – 28% ended up in intensive care, and 16% ended up on a ventilator.