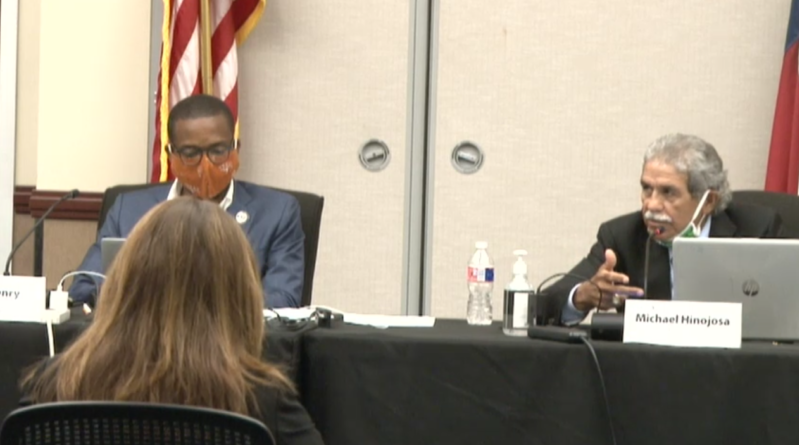 Sixty people signed up to speak about Dallas ISD’s plan for back to school at a special called meeting of the board of trustees on Thursday afternoon, and all but about two spoke about the district’s plans for back to school.

And not one spoke in favor of returning to campus before the Dallas area had the pandemic firmly in hand, and cases had declined considerably.

The school board ultimately approved a new calendar that will have school starting on Sept. 8 and ending on June 18, with Fair Day holidays eliminated and an Election Day holiday added in. The calendar also changes the grading periods from six weeks to nine weeks.

But much of the discussion – from commenters and board members – centered around the district’s plans for both on-campus and online learning, and why starting after Labor Day was preferable to the original August 17 start date.

Teachers and parents signed up to speak during the public comment portion of the meeting, which stretched to about two hours.

“We cannot bring back a teacher or a child who falls victim to this illness,” one teacher said. “Our teachers and school staff are not expendable.”

“I am ready to be in my classroom because I understand that many parents will not have a choice. And wherever my students are, I will be, even if I don’t think it’s safe,” said another teacher. “However, this is not the right choice for my old high school teacher who is immune-compromised and just welcomed her new baby grandson in the world.”

“I’m speaking today, because we’re talking about starting a school year when we know that just by sending students, teachers and staff into a school building, that some of them will become very ill, and some will die,” said Christina Childress, a parent and co-founder of Parent Advocates for Children and Teachers, or PACT. “And they will die because they were inside of that building, and they didn’t have to be.”

“We can always catch up a student, but we can’t bring back a life,” another teacher said.”One life lost is one too many.”

Another said she had more questions after reading the district’s playbook, adding that it seemed as if it put a lot of responsibility for infection control on the teacher’s shoulders.

“What are the legal ramifications if an outbreak happens in our classroom?” she asked.

Rena Honea, the president of the Alliance-AFT, said the teachers union was requesting the district hold classes online for the entire fall semester.

“The loss of one life is not worth the risk you are asking for students and employees,” she said.

Several teachers said they wished they had been consulted about the district’s plans, because after seeing the re-entry plan, there were issues that a seasoned teacher would’ve pointed out.

Chief of School Leadership Stephanie Elizalde explained some of the process for re-entry with a slide deck. She told board members that when the district first began planning, it was widely believed that the virus would be contained, and they’d be almost ready to open like normal. But as the summer progressed, it became clear that would not be the case.

“To those outside, it may seem that we’re indecisive,” Elizalde said, pointing to how often the UIL and the TEA’s rules have changed just in one week. “But the rules are changing, sometimes daily.”

One thing she could guarantee – that with the extra time to help train teachers and then students, the new school year version of distance learning would be different from the quickly-implemented spring version.

“Our virtual instruction this year will not be what we did last year,” Elizalde said, saying they took in teacher and parent input, and that the goal this year was to only need parents to help facilitate (such as getting a younger student logged in to their device, or making sure they were paying attention), but not teach.

Elizalde also said that the district would need time to distribute technology and hot spots to students, as well as deliver PPE and supplies to campuses.

Earlier in the day, Superintendent Michael Hinojosa addressed the U.S. House Committee on Education and Labor about the challenges of opening school during a pandemic and also mentioned the technology gaps students face.

“Broadband connectivity is a huge issue for us,” Hinojosa told the committee. “If we have to shut down again or offer virtual instruction, we have to knock down the front door and provide that opportunity for students to learn from home.”

Trustee Dustin Marshall said he had gotten a steady stream of input from constituents who didn’t wish to see the school year extended. He asked Elizalde why the district can’t start on August 17 if they’re going all virtual.

Elizalde said that it is because they would like the three weeks to better prepare teachers and principals – who weren’t on contract over the summer, adding that they could do it if the board rejected the calendar, but it would be more difficult.

“If we don’t get this right on the instructional delivery virtually, I’m going to frustrate a lot of parents,” she said.

Trustees Miguel Solis and Ben Mackey queried about so-called “year-round” or intersessional calendars, but Elizalde said that the pivot was not something the district was looking at just yet.

Trustee Dan Micciche pointed out that the district could benefit from delaying its start date, one by possibly being able to have in-person instruction later in the year, and also by learning about what works and what doesn’t for districts that do start earlier.

Additionally, district staff said that by the state rules from the Texas Education Agency, the “clock” starts when school starts on whether a district can take advantage of the eight week option for all-virtual learning if the district is in a hot spot. Starting after Labor Day gives the ability to potentially extend virtual learning – if need be – deeper into the first semester.

“We don’t know if it will get better or worse. We lose control of our own destiny if we start on Aug. 17,” Hinojosa said.

The TEA’s stance is that campuses should be open for on-campus instruction for families who ask for it, and if they aren’t, they could put state funding at risk.

However, the TEA also issued further guidance last week that allows districts to teach virtually for up to four weeks, then seek school board approval for another four weeks, for a total of eight weeks at the beginning of the school year.

That, it seems, was enough to sway Marshall and trustee Edwin Flores, who said they had been prepared to vote against the calendar before understanding the economic ramifications to the district.

“I’ve changed my perspective on this, from a financial perspective,” Marshall said.

To view the district’s re-entry playbook for families, click here.

To see the guide for teachers and staff, click here.