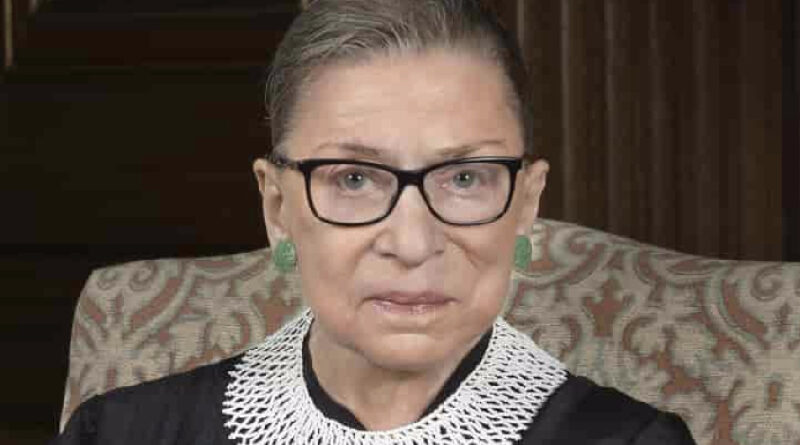 It may be hard to believe now – but when Ruth Bader Ginsburg took her place in the Supreme Court in 1993, she was only the second woman to ever serve on the high court.

Ginsburg attended law school at Harvard in an era where women didn’t often earn law degrees from Harvard – she was one of only nine women in her class.

“When you think about — the world has changed really in what women are doing,” Ginsburg said last year. “I went to law school when women were less than 3% of lawyers in the country; today, they are 50%. I never had a woman teacher in college or in law school. The changes have been enormous. And they’ve just — they’ve gone much too far [to be] going back.”

She went on to become the first female tenured professor at Columbia Law School, and later brought cases before the Supreme Court as the founder of the American Civil Liberties Union’s Women’s Rights Project.

She was appointed a judge of the United States Court of Appeals for the District of Columbia Circuit in 1980.

When asked how she wanted to be remembered, Ginsburg once said she wished to be known as “someone who used whatever talent she had to do her work to the very best of her ability. And to help repair tears in her society, to make things a little better through the use of whatever ability she has.”

Judging from the tributes that have poured in since her passing was announced, that effort did not go unnoticed. Here are a few:

“Our Nation has lost a jurist of historic stature. We at the Supreme Court have lost a cherished colleague. Today we mourn, but with confidence that future generations will remember Ruth Bader Ginsburg as we knew her — a tireless and resolute champion of justice.” – Chief Justice John G. Roberts, Jr.

“Renowned for her brilliant mind and her powerful dissents at the Supreme Court, Justice Ginsburg demonstrated that one can disagree without being disagreeable toward one’s colleagues or different points of view.” – President Donald Trump

“Justice Ginsburg inspired the generations who followed her, from the tiniest trick-or-treaters to law students burning the midnight oil to the most powerful leaders in the land. Michelle and I admired her greatly, we’re profoundly thankful for the legacy she left this country, and we offer our gratitude and our condolences to her children and grandchildren tonight.” – former President Barack Obama

“Laura and I join our fellow Americans in mourning the loss of Ruth Bader Ginsburg. She dedicated many of her 87 remarkable years to the pursuit of justice and equality, and she inspired more than one generation of women and girls. Justice Ginsburg loved our country and the law. Laura and I are fortunate to have known this smart and humorous trailblazer, and we send our condolences to the Ginsburg family.” – former President George W. Bush

“My heart goes out to Ruth Bader Ginsberg’s family, and Cecilia and I are keeping them in our prayers. Justice Ginsberg was a trailblazer of keen intellect and will be remembered as a judicial giant. She put service above self and leaves behind a grateful nation.” – Gov. Greg Abbott

“Our hearts go out to the family of United States Supreme Court Justice Ruth Bader Ginsburg, a remarkable woman, a fighter of top intellect and reason, who passed away this evening. Justice Ginsburg broke countless barriers throughout her long, distinguished career and served as an example for women across the country. We are thankful for her service.” – Texas Attorney General Ken Paxton

“Godspeed to Justice Ruth Bader Ginsburg, an American hero who devoted her life to equality. Please join me in praying for our democracy and the rights of all Americans. My hope is that Senate Republicans will follow the same procedure they did after the death of Justice Scalia, when they said it would be a disservice to America to fill a vacancy less than a year before an election.” – Dallas County Judge Clay Jenkins

“Justice Ruth Bader Ginsburg was a judicial giant, approved on a 96-3 vote in the United States Senate. She fought for justice and helped make women more equal in the eyes of the law. Whatever your politics, this is an incredible loss. May she Rest In Peace.” – Dallas Mayor Eric Johnson