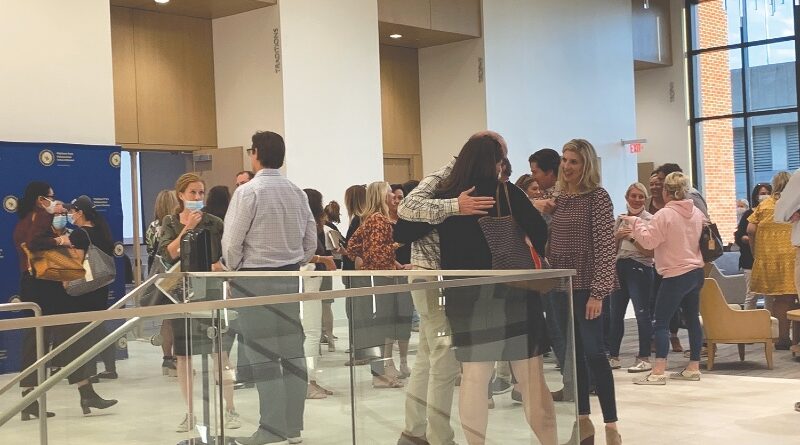 In the declaration, named for a small Massachusetts town, three scientists argue for lifting pandemic restrictions and allowing low-risk individuals to get infected and build immunity.

“As immunity builds in the population, the risk of infection to all – including the vulnerable – falls,” the scientists from Harvard, Oxford, and Stanford Universities say.

Better-known scientists rushed to debunk it.

“We just gotta look that square in the eye and say it’s nonsense,” Dr. Anthony Fauci, director of the National Institute of Allergy and Infectious Diseases, told ABC News.

According to gbdeclaration.org, hundreds of thousands – including self-identified scientists – signed a petition supporting the declaration. But it includes fake names such as Dr. I.P. Freely, Dr. Person Fakename, and Dr. Johnny Bananas, news organizations reported.

Locally, Park Cities Parents Unite identifies as a 501(c)(4) nonprofit, decries a shift away from conservative values, and aims to empower residents to “control the public policy decisions made within their communities with respect to their children, safety, culture, and freedoms,” according to pcparentsunite.org. The website also cites HPISD curriculum and budget as areas of concern.

The website does not identify Park Cities Parents Unite leadership, but a Facebook group linked on the site shows a Spencer Siino and Jon Paul Long as admins and Clifton Dugas as a moderator.

One of the speakers at a recent school board meeting didn’t mention the nonprofit but identified himself as Spencer Siino.

“Obviously, all of us parents expect their children to be safe wherever we send them, but the measures taken in response to COVID-19 have been unambiguously harmful to the health and safety of our children,” Siino said.

Another speaker, Elka Carroll, objected to contact tracing and used language similar to that of pcparentsunite.org.

“If this was about health, our kids wouldn’t wear masks in PE, while running track or playing tennis or cheerleading or simply playing outside,” Carroll said. “Contact tracing kids and sending them home even if they’re not sick is a sure setup for prejudice, discrimination, a violation of privacy, and some would call it a witch hunt.”

In contact tracing, trained personnel ask those who test positive about where they’ve been and who they’ve been in contact with so that those contacts can be alerted to their potential exposure and provided information about what to do.

Other parents have signed onto a document to “support the tireless work the district continues to do that allows our children to safely attend school.”

Organizers say their document had 608 signatures in less than 24 hours as of Thursday evening.

UT Southwestern Medical Center associate professor of pediatrics and internal medicine and HPISD parent Dr. Christy Turer said a COVID-19 vaccine is in the works, but, for now, policies Highland Park ISD has in place for safety protocols like social distancing are “warranted.”

“The rising rate of covid cases in University Park vs. elsewhere in Dallas County, along with a second wave of the pandemic and upcoming flu season suggest non-pharmacological precautions for social distancing and safe work spaces at school are warranted,” Turer said in a statement.

TCU adjunct professor of criminal justice, author of The Unexpected Spy, and HPISD parent Tracy Walder also signed the document and said the measures the district put in place are why she feels comfortable sending her daughter to school.

“The protocols that HPISD has in place are precisely why I feel comfortable sending our daughter too and I believe they have directly contributed to the fact that we have not seen large-scale outbreaks,” Walder said. “When I ask my daughter about her day, no mention is made of her mask or plexiglass divider; rather she talks about the tarantula she touched, the songs in Spanish she learned, and the treasure chest she selected a toy from in class for being a reader.  The teachers and administration have made every effort possible to make students feel comfortable and I feel that this has been extremely successful.”

As an educator, Walder said this year is the most difficult she’s experienced in her 15 years of teaching.

“But, the difficulties that I am experiencing are all to be able to provide students the best experience possible. Because of the stringent protocols that the schools I teach at have in place, neither one has experienced a large-scale outbreak.  To me, Bradfield Elementary is a model for how a school can keep students safe,” she added.

Trustee Tom Sharpe has also defended the district’s approach and applauded administrators, teachers, and staff for how they have managed constraints, remote instruction, PPEs, and protocols.

“I recognize there’s a wide range of opinions on what is the right thing to do here,” Sharpe said, noting the district hears from an equal number of people concerned schools aren’t doing enough to slow the spread. “I still think the decisions we’re making are the right decisions.”