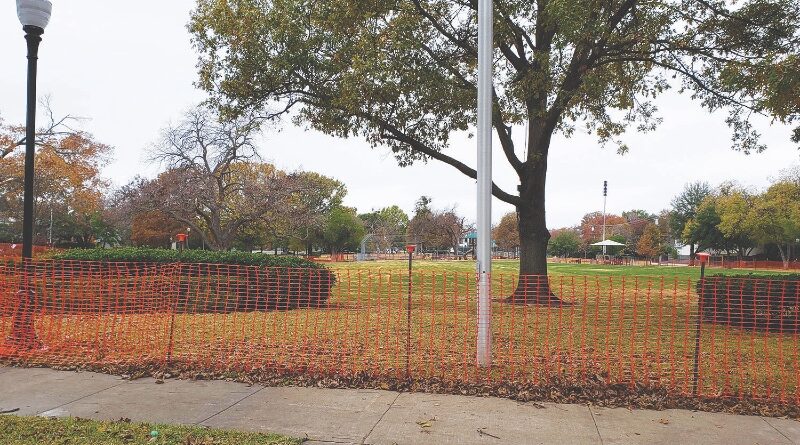 After about seven months, work on the underground stormwater detention project in Caruth Park has finished.

The project should alleviate street flooding in neighborhoods close to the park.

Work involved installing an underground detention structure under the field on the east side of Caruth Park, plus some above-ground improvements. The facility increases the capacity of University Park’s stormwater system by 11 acre-feet or just more than 3.5 million gallons.

The above-ground improvements include installing 10,000 square yards of Tiff Bermuda sod above the detention structure, a new irrigation system for the turf, new decorative light poles on the park’s east side, and new accessible parking spaces and ramps.

While the work is finished on the detention structure, temporary fencing remains to allow the new turf to mature and be ready for spring.

“I’m glad to say that the construction fence is down and the turf’s in,” University Park Mayor Tommy Stewart said during a meeting with city, Highland Park, and Highland Park ISD officials. “We’ll be ready to have activity on it just as soon as we let the turf mature a little bit, and we just ask everybody to stay off the turf… until we get the orange tape down.”

Funding for the $5.4 million project came through the city’s capital improvements program.

The stormwater detention work at Caruth Park is part of a broader stormwater improvement effort.

City officials noted that before the Caruth Park project got underway, the stormwater system, installed between 1925 and 1955, went without upgrades for 65 or so years. Also, 50% of all rain events exceed system capacity.

“This is the northeast sector that we’re working on first,” Stewart said.