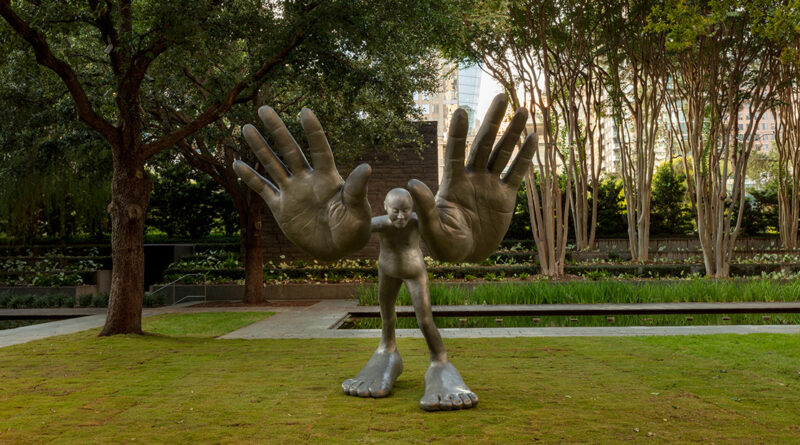 Is Dallas artist’s new Nasher sculpture the epitome of the pandemic?

When Nic Nicosia began forming what eventually would become the large stainless steel sculpture bighands, he had no idea the piece would land at the Nasher Sculpture Center in the middle of a pandemic and become, for some, the embodiment of 2020.

After all, if ever there was a piece of art that seemed to say, “Stay away from me, move back,” it would be an 8-foot-tall man with his oversized hands thrusting forward.

“I guess timing is everything,” Nicosia said.

The Nasher announced the acquisition of the new work by the Preston Hollow artist in October. The museum had commissioned the cast statue.

But sculpture isn’t Nicosia’s only media. He was first known for his photography and film work and has even learned the violin and incorporated compositions into installations at galleries.

We sat down with the artist to talk about his sculpture.

One of my friends saw a picture of bighands not long after the Nasher made the announcement and said, “You know, if ever there was a sculpture that accurately represented what’s going on this year, it’s that one.”

It wasn’t just “six feet back” – it was just “stop.” Just stop the craziness that we’ve lived with for four years, just the constant being beat up by the news cycle and the politicians and the health issues and the financial. I mean, just the whole world, you know – the wars and the tensions everywhere.

That’s what I was feeling personally when I made it, but it was just about me. It wasn’t about any universal thing at the time because it was part of (his show) “In the Absence of Others.”

That show was really one of my most personally successful, not only because the work meant so much to me, but I was also learning how to play the violin at the time. And I wrote like a 15-minute violin thing that we played during the exhibition.

I know you started the piece well before the pandemic, but it does kind of speak to that feeling of wanting some distance.

You know, that’s what they thought too. You know, it was really funny.

There’s another part to that sculpture that people probably don’t notice so much – that his eyes are almost closed. And his face is very sweet, a very sort of pensive compared to the physicality of either pushing or whatever he’s doing. That face is in a different space. And that’s because I learned how to meditate a little bit before that. And so he’s also in a meditative state, so he’s completely nuts as far as what he’s got – you know, two things going on, where it’s sort of like in thought and also a physical action.

And his eyes aren’t closed; they’re just sorta closed. My granddaughter won’t look at him because that freaked her out.