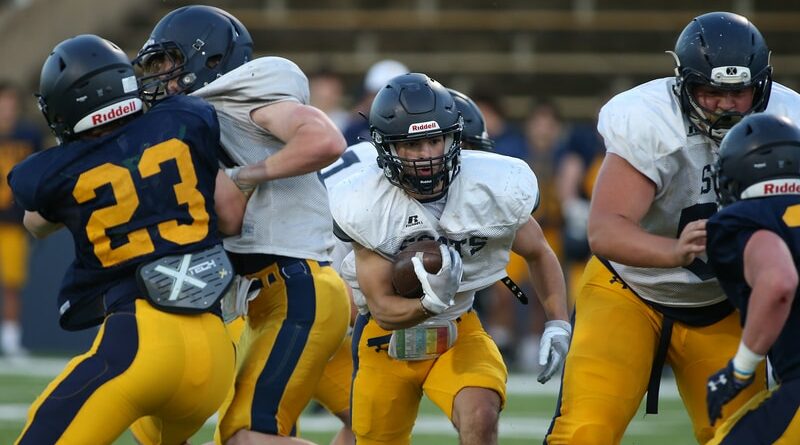 At Highland Park, it's never too early to start thinking about next football season. (PHOTO: Chris McGathey)
Park Cities Sports
May 14, 2021May 20, 2021 Todd Jorgenson 0 Comments

Still, head coach Randy Allen is pleased that his program was able to re-establish its offseason routine following a year of interruptions due to the COVID-19 pandemic.

“We had to remember how we did spring training, since we didn’t have it last year,” Allen joked.

During three weeks of spring workouts, which culminated in a public scrimmage on Thursday at Highlander Stadium, the Scots were able to develop chemistry while coaches evaluated younger players on the roster.

“It’s a great way to end the school year. We’ve gained a lot of experience and repetition, and feel better about our depth chart,” Allen said. “It’s always exciting for our players to start competing before a new season. There’s a lot of enthusiasm.”

There will be plenty of new faces in the starting lineup on both sides of scrimmage for HP in 2021. One of them is dual-threat quarterback Brennan Storer, an incoming junior who Allen said makes good decisions and has improved his throwing velocity and accuracy.

“He’s gotten lots of reps, and just getting the chemistry with his receivers has been important. He’s had a really good spring from that standpoint,” Allen said. “It’s been very important for him. He’s gotten better each week.”

Storer will have some experienced receivers to target in the fall, with the returnees including Luke Herring, Jackson Heis, Luke Rossley, John Rutledge, and Grayson Schrank. Grant Gibson will be back to anchor the offensive line.

The Scots, who finished 11-1 overall last year, will start fall practice on Aug. 14. They will face Plano East in a scrimmage on Aug. 19, then open the regular season on Aug. 26 with a neutral-site showdown against Southlake Carroll.