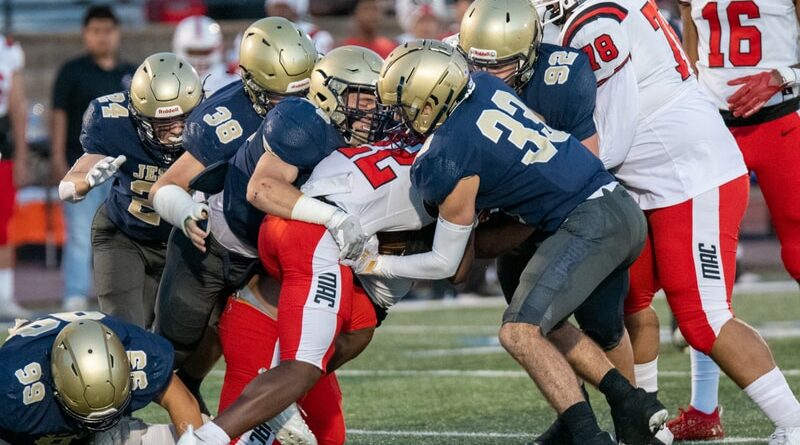 The Jesuit defense hit the reset button in a big way during a 34-0 thumping of Irving MacArthur on Friday at Postell Stadium.

After allowing more than 40 points per game in the first half of the season — albeit against some high-powered offenses — the Rangers surrendered only 44 total yards against the struggling Cardinals and posted their first shutout of 2021.

The Rangers (5-1, 3-0) picked up their fourth consecutive victory overall heading into a showdown on the road with upstart District 7-6A co-leader Irving Nimitz on Oct. 14.

After a slow start, the Jesuit offense surpassed the 30-point mark for the fifth time in six games. Gage Roy was 18-of-26 passing for 220 yards and a touchdown. He also ran for a score.

Roy’s touchdown strike was a 16-yarder to Hunter Krepp late in the second quarter. Krepp caught five passes for 83 yards and has scored in every game this season.

Jake Musso led Jesuit with seven receptions for 84 yards. Robert Fitzgerald paced the rushing attack with 47 yards on 15 attempts including a touchdown, while also leading the defensive effort.

The Cardinals (1-5, 0-3) didn’t gain more than 10 yards on any play from scrimmage and did not convert a third-down attempt. Their five completed passes went for just 18 combined yards.