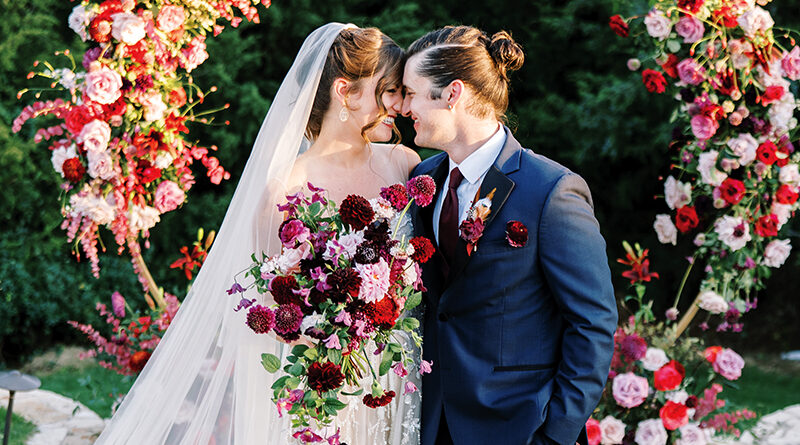 The bride is the daughter of Donna and John Watters of Dallas. She is a 2011 graduate of The Hockaday School. In 2015, she received a Bachelor of Arts in psychology from Middlebury College. In 2020, she completed her Master of Public Health from UNC Gillings School of Global Public Health, Department of Health Behavior. Casey is now a research associate at the Colorado State University Social Work Research Center.

The groom is the son of Sheri and Jeffrey Black of Tucson, Arizona. He is a 2013 graduate of the RAF Alconbury. In 2017, he received a Bachelor of Science in Environmental Sustainability Science from Cornell University. In 2018, he completed his Master of Science in Geography from the National University of Ireland at Galway. Jeffrey is currently a doctoral student and graduate research assistant at Colorado State University’s Department of Human Dimensions of Natural Resources.

The bride walked down the aisle with both of her parents. For her wedding, Casey wore an exquisite gown designed by Reem Acra. The A-line gown featured an intricate bow detailed embroidery, which cascaded into a tulle skirt and train. The design combined a delicate illusion neckline, corset bodice, and nude lining to show dimension. The bride paired her gown with her sister’s blush European cathedral veil by Monvieve of Milan.

Bows and Arrows provided the florals for the wedding and the reception in hues of burgundy and pink–pairing dahlias, garden roses, scabiosa, snowberries, chrysanthemums, hyacinth, carnations, and snapdragons with an abundance of greenery. A “Rose” motif carried throughout the festivities as a nod to the bride’s middle name.

For the reception at The Laurel, the seating display consisted of laser-cut calligraphed cards placed in ombre fashion on a wooden and boxwood wall, clad with abundant florals. In addition, laser-cut letters crafted in wood spelled out, “Be Seated With The Blackwatters,” against the boxwood.

The cocktail hour was hosted on the lawn, where guests enjoyed games such as giant Jenga and corn hole, with boards designed with the couple’s rose monogram. The “Bride’s Lavender Love Potion” specialty cocktail included dry ice, adding a smoking effect to the All Hallow’s Eve weekend.

The couple danced their first dance to “Stand by Me,” then the band Downtown Fever had guests packing the dance floor all night. Slo Mo Video captured guests against a floral-filled boxwood backdrop.

For dessert, The Laurel spread a table with an array of confections on plateaus and trays themed to the wedding and decorated with delicate florals. The couple’s priority was to have a donut wall with icing in the wedding hues to celebrate their favorite dessert. When It Clicks captured the wedding and the reception on video, Shannon Skloss Photography preserved the images. Caroline Events planned and coordinated the memorable occasion even securing a 1957 Ford Skyliner as the perfect get-away car for Casey and Jeffrey.

The newlyweds honeymooned in Cancun, Mexico, in July of 2021 and now reside in Fort Collins, Colorado. 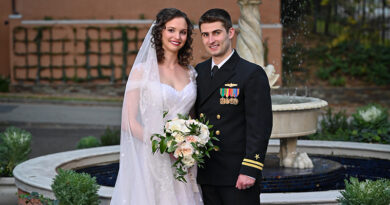 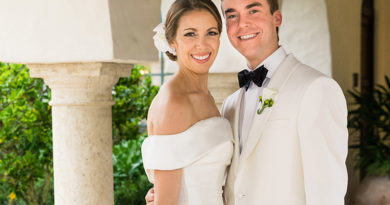