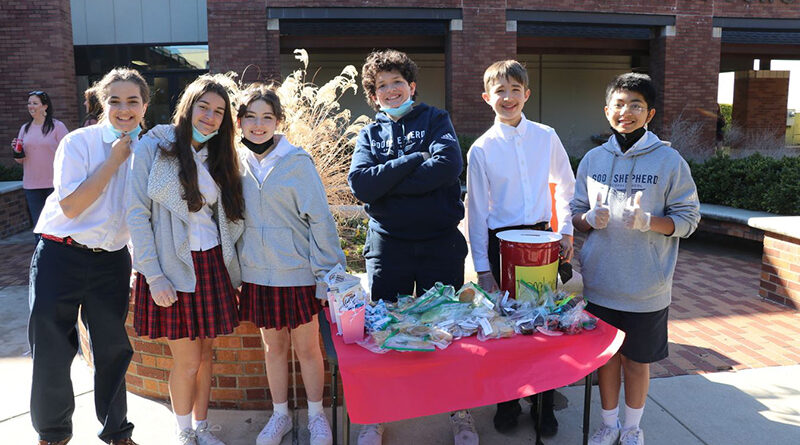 What happens at camp doesn’t have to stay at camp.

“I’ve always said I want to try and be someone who helps others,” Schardin said. “When I did the lemonade stand, that’s when I felt that I really achieved my goal in becoming that person.”

During the 2021 Good Shepherd Summer Program, Shannon introduced Schardin and other campers to Sole Hope.

The nonprofit aids Ugandans suffering from jiggers, a crippling parasite that prevents children from going to school, running, and playing. Infestations cause pain, itching, and infection.

“We take for granted we have shoes we can wear,” Schardin said. “We don’t have to worry about stepping on glass or anything like that. But for some kids in Africa, they don’t have shoes.”

To address that need, Schardin promoted his lemonade stand with yard signs and social media. The stand operated from 4:30 to 7 p.m., raising $390 – more than enough for each camper to send a pair of shoes to Uganda.

“When he came back (to camp) the next day, I cried,” Shannon said, recalling the “huge envelope with all these dollar bills.”

Good Shepherd teacher Emily Mason described Schardin as having a heart of gold and a servant’s heart. “He is a great influence to those around him and a positive leader.”

In continued support of Sole Hope, her seventh-grade Counting for Kindness Class cut pieces of denim to make sets of toddler shoes and held a lemonade stand/bake sale this spring, raising $560 in 40 minutes – enough to provide 40 pairs of shoes.

“The kids were so committed and meticulous,” Mason said. “They were extremely focused and really wanted to give it their all.”

And Schardin has a message for those who want to make a difference, too.

“You can do something as small as a lemonade stand to raise enough money to get people in Africa a pair of shoes,” Schardin said. “Just follow your heart. Don’t stop. Keep doing it.”

Half of Elementary Classes Need Waivers