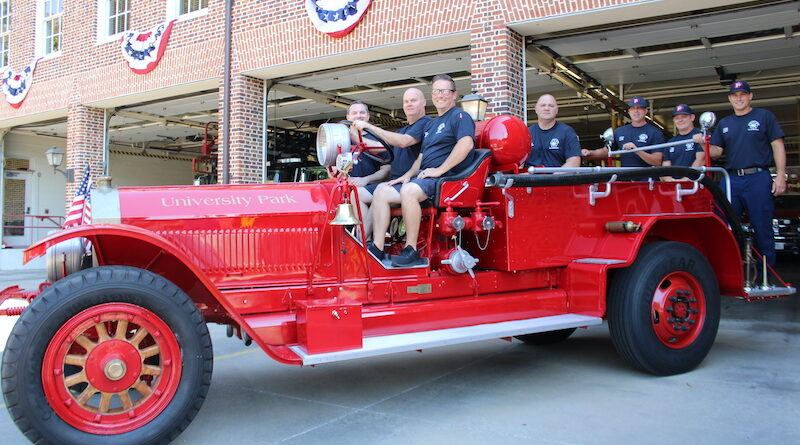 A piece of University Park history will again drive through city streets as part of the Rotary Club of Park Cities Fourth of July Parade.

The story began when the city of University Park bought a 1925 American LaFrance fire engine/pumper to replace its first one was destroyed fighting a dormitory fire on SMU’s campus. The new (at the time) engine/pumper remained in use until it was sold at auction in the late 1930s.

The late Bobby Ramsey, a former assistant chief with Travis County Fire Control and fire equipment aficionado who owned a 1952 Seagraves pumper himself, found University Park’s 1920s-era pumper years later stored in an airplane hangar at an old military base.

After Ramsey’s death in the early 2000s, the Jolleyville Texas fire department bought both pumpers from his family for use in parades and other community events.

Jolleyville Fire Chief Brad Landi investigated the history of the 1925 pumper, contacted LaFrance, and was informed it was built for the city of University Park.

University Park spokeswoman Paige Ruedy said Robert Behrens refurbished the pumper with his own money while it was still owned by the Jolleyville Fire Department. The Jolleyville Fire Department initially planned to sell it to a fire museum, but plans began for it to come back to University Park after Landi spoke with UPFD assistant chief Scott Green at a conference.

The city of University Park bought the pumper back in February of 2021, and the city’s equipment services division soon began work including equipping the pumper with a modern braking system and refurbished engine ahead of its public debut at the 4th of July Parade Monday.

“This has been a process that has taken us about a year and a half (to get the engine/pumper ready to operate),” UP Fire Chief Randy Howell said. “We’re so proud to have it to represent the history of the department.”