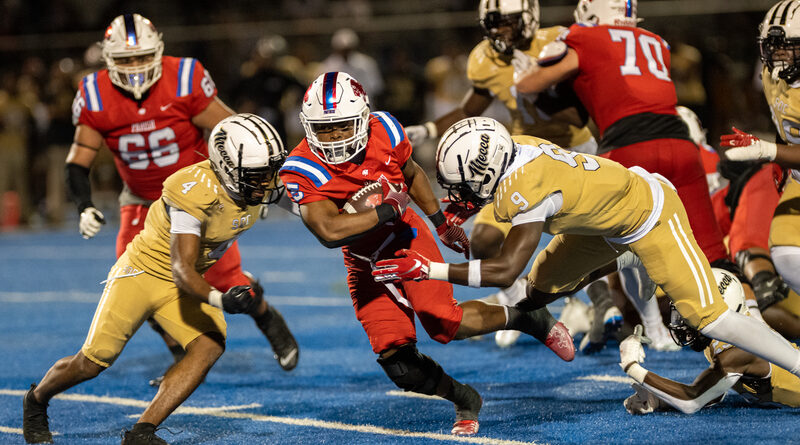 A rollercoaster of a game went off the rails in the fourth quarter for Parish Episcopal on Friday.

Miscues ultimately doomed the Panthers against South Oak Cliff, which rallied for a 31-28 win in a matchup of defending state champions at Snyder Stadium.

Parish led by 14 points in the second half but committed turnovers on their final four possessions, opening the door for a rally by the Golden Bears, culminating in a 43-yard field goal by Diego Varela as time expired.

It led to the first defeat during an extremely challenging nondistrict schedule for the Panthers (3-1), who have won three consecutive championships at the TAPPS 6A level. They had won 14 straight games overall prior to Friday.

Conversely, the victory snapped an early three-game skid for the Golden Bears (1-3), who earned a UIL crown last season in Class 5A Division II and likewise have endured a scheduling gauntlet thus far.

Whether both teams eventually benefit as intended from the seesaw clash remains to be seen, but Parish hopes to learn valuable lessons once Friday’s heartbreak subsides.

“You can’t make critical errors at critical junctures of the game and expect to win. That’s the bottom line,” said Parish head coach Daniel Novakov. “It’s disappointing because we had our chances and just didn’t make the critical plays when we had to.”

The Panthers opened the season with wins over perennial UIL powers Aledo and Austin LBJ, as well as SPC powerhouse Houston Episcopal. Next week, they will face reigning 4A Division II state champion China Spring (which has won 20 straight games) before beginning TAPPS district play in early October.

“We want to take on the best of the best. That’s how we want to market ourselves,” Novakov said. “We’re trying to take it up a level. We’re the only private school doing this. It’s not going to be easy.”

Parish started slowly on offense against SOC, managing just two total yards in the first quarter. The Panthers didn’t earn a first down until midway through the second, when they trailed 14-0.

Then a 77-yard connection with Cooper Mailand — a linebacker who lined up as a tight end — tied the game early in the third. It was Mailand’s first catch of the season, and it couldn’t have been more crucial.

Maddux Reid scampered 49 yards to the end zone to give the Panthers their first lead at 21-14, and moments later, Kamsi Arinze returned an interception for a score to provide insurance.

That’s when everything fell apart. Parish had four possessions in the final 15 minutes of the game. In order: fumble, interception, fumble, fumble.

SOC, which controlled time of possession throughout the game — executing more than twice as many offensive snaps as the Panthers — took advantage of the favorable field position with its punishing ground attack.

Danny Green rushed for 122 yards and three touchdowns, including the game-tying score with 8:10 remaining. Tedrick Williams tallied a game-high 155 yards and a touchdown.

Even though the Golden Bears accumulated 336 rushing yards, the Parish defense held tough for most of the night. Daniel Demery blocked a field goal in the first quarter, and the Panthers made a key fourth-down stop before halftime.

“Our defense has been playing really well,” Novakov said. “They’ve been the strength of our team so far this season.”

Reid rushed for 94 yards on 18 carries for Parish. Anderson completed just eight passes but finished with 187 yards, while Eusebio paced all receivers with 84 yards on four catches.