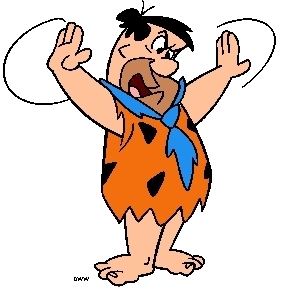 Recently we discussed the lyrics to Tik Tok by Kesha after one of my kids was doing a sing-a-long in the car with her friends. They sang every painful word. Before I leave, brush my teeth with a bottle of Jack…

But I’ll tell you what’s even more painful. A group of 7-9 year old children singing, Call me Mr. Flintstone, I can make your bed rock. Dis. Turb. Ing.

Try writing a column with that song stuck in your head.

See Greenhill’s Houston at The Meyerson

Are You Ready For Super Bowl of Indian Dancing?

14 thoughts on “Fred Flintstone Can’t Be Happy About This”