The third and decisive game might have lasted five innings, but in reality, the outcome of W.T. White’s area round playoff series against Rockwall was determined in one inning.

The Yellowjackets scored 14 runs in the first inning on Saturday as part of a 16-2 win that eliminated the Longhorns from the Class 6A Region II playoffs.

White upset Rockwall 2-0 in the series opener on Thursday, thanks to a three-hit shutout from Michael Rojas, before falling 5-2 on Saturday morning to set up the third game later that day.

Earlier in the playoffs, the Longhorns (13-12) swept Mesquite Horn in the bi-district round to advance to the area round for the first time since 2009. 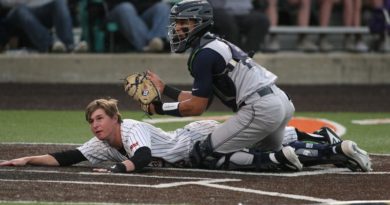