The presentation, a part of the center’s Red Carpet Speaker Series, focused on United States military, economic, and political roles in the world. More than 350 people attended, and North received a standing ovation.

Before his presentation, North met with a group of resident veterans and special guests of Edgemere, when they discussed war stories and politics.

North served as a Marine officer for 22 years and was awarded the Silver Star, Bronze Star, and two Purple Hearts for his service. He also worked in counter-terrorism with the National Security Council during the Reagan administration. 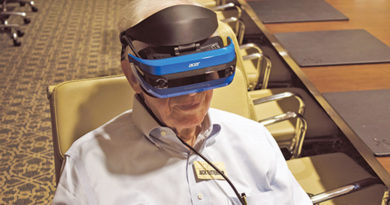 Ground Has Been Broken at Edgemere