MISSION: Founded in 1992, the Mary Crowley Cancer Research Centers have served more than 5,300 patients and conducted more than 300 FDA-approved clinical trials.
SAVE THE DATE: Allison’s Hope 2015 Hope in Hollywood Gala, Sept. 26
FIND THEM AT: marycrowley.org

Once every three weeks, Jerry St. Don makes the trip from his home in Abilene to the Mary Crowley Cancer Research Center in Dallas. The 56-year-old jokingly calls the trip a “pain in his butt,” but that notion subsides upon entering the 12,000 square feet space.

St. Don is something of a gentle giant. He has a tough exterior, yet an undeniable twinkle in his eye when he smiles. Then, there’s that dash of goofiness. He says his sense of humor is what keeps him sane. St. Don enjoys all sports related to the great state. He does some hunting here and there. But, his face lights up at the mention of golf. That’s his love. It’s also the sport that may have saved his life.

About four years back, St. Don was golfing with a few of his buddies. He was having a rather impressive game, sitting at three under with six holes left. As luck would have it, a storm began to brew, putting a damper on the guys’ game.

“I was like, ‘I ain’t leaving! I’m three under!” said St. Don in between laughs.

He and a friend chose to stay on the course despite the inclement weather. At about four holes left, it began to pour. Sure enough, a week later the duo had pneumonia. But, St. Don’s doctor found something more.

“My doctor saw something on the x-ray that he didn’t like,” St. Don said. “He sent me to a lung doctor, put me through a few scans, then, I finally got a biopsy. That’s how they found it. The grace of God is what I call it. Otherwise, I’d just kept going on.”

It was lung cancer. The official diagnosis was made in January 2012, and he began treatment. There was a period of remission, but when it returned, St. Don’s oncologist in Abilene recommended that he give the researchers at Mary Crowley a shot at improving his situation. He was eventually matched with a clinical trial and began treatment at the research center, marking the start of several commutes to Dallas.

St. Don understood that his diagnosis would present quite a challenge physically. Perhaps the battle that he found the hardest was the one in his head. Yes, he lost some of his physical strength, maybe his breath from time to time, but the most painful thing was losing some of his best friends. Even a fiancée. It took a toll on him mentally.

“You’d be surprised how some people can’t handle your sickness. It’s tough for them, too,” St. Don said. “The people here are great. They’re kind, it’s a good place to come to, and they have real feelings. They gave me a lot of hope, and it seems to be working.”

“Hope Lives Here” is the center’s tagline, but St. Don found even more than that.

The Mary Crowley Cancer Research Center is a cancer clinical research center that is recognized as a leader in targeted, vaccine and gene therapies. The nonprofit was established in 1992 as a way to advance the research of drugs used to treat cancer patients.

Crowley, a Dallas businesswoman and mastermind behind Home Interiors, was first diagnosed with cervical cancer in 1957. At the time of her diagnosis she was able to get an experimental drug that put her into remission. Twenty years passed, her business boomed, but her cancer returned. She went to the same doctor in hopes of being treated again, but there were no new drugs. As her health began to decline, she knew that she wanted to provide an alternative for future patients that would face similar battles.

“She said to the doctor, ‘What have you been doing? I’ve built a multibillion-dollar business. What are researchers doing about this?’” said Pat Brown, director of strategic development. “What she wanted to leave as part of her legacy was a research center that could advance these drugs faster to get to patients and have access to any patient who needed these drugs.”

The research center works to find potentially curative treatments for patients through clinical trial testing. They take on a patient-specific approach that aligns an individual’s cancer with the newest discoveries in genomic and immune therapies. The center is one of several centers across the country that receives these agents, and there could be between 30 to 40 clinical trials treating available at the clinic.

The center focuses on solid tumor types of cancer in adults and children with Ewing’s Sarcoma. Most patients that are referred have been told that they don’t have much time left. Patients come in from all over the nation seeking hope for extended survival. The staff realizes that they are in a true position to provide that.

“We’re not just passing the word hope around. We have a reason for saying that,” said Ellen Dearman, vice president of development. “Most of our patients have been given six to nine months to live. So, we’re not only helping an individual, but we’re also moving these new drugs forward through the pipeline in hopes of getting it FDA approved for patients world wide. So, it’s not only hope for individuals; it’s hope for a lot of patients worldwide. “Since its establishment 24 years ago, there have been nine targeted drugs placed on the market that were tested at Mary Crowley. The goal for the center is to continue this advancement and to get patients to seek investigational treatment as an option early on.

There are over 80 staff members on hand, split between taking care of patients and working on the back end with pharmaceutical companies. But, a lot of a patient’s care is dependent on people they don’t even know. Forty percent of the organization’s budget comes from philanthropy, and every philanthropy dollar goes directly to opening a trial for a patient. The other sixty percent covers the overhead costs.

“Without philanthropy, we would not have the research options needed for patients who seek our help during their cancer journey,” said chief operating officer Shannon Cagnina. “Philanthropy is critical to our work, which advances new treatments for cancer patients worldwide.”

Another product of philanthropy is their benevolence program. A cancer diagnosis can completely drain a patient’s financial resources. This program was established to financially assist qualified patients with transportation to the center, copays, etc. St. Don is on this program, and couldn’t thank donators enough for this support.

“I’m so appreciative,” St. Don said. “I don’t think I’d have the money, especially as far as fuel is concerned.”

St. Don says that he’s in God’s grace. His last tests showed shrinkage in his tumor, providing further proof that he’s exactly where he needs to be. St. Don is at peace with his diagnosis and chooses to enjoy time, play a little golf when he can, and truly take in the people he comes in contact with. Especially those at the center.

“The staff and the physician investigators here truly feel it’s a privilege when a patient seeks us out,” Brown said. “We become their extended family during that time, and in some cases, we’re with them in their last days of their life or last months of their life. That’s an honor.” 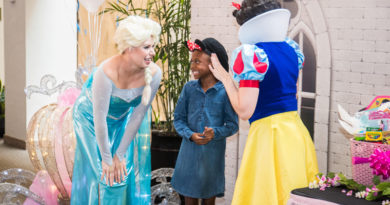