With Highland Park trailing by six points and its passing game sputtering, the Scots needed to summon their biggest drive of the season.

That’s exactly how HP rallied to beat North Mesquite 28-27 on Friday at Highlander Stadium, as the Scots grabbed their first lead of the night on a 12-yard touchdown pass from a scrambling Henry Allen to a leaping Cy McCullough with 2:12 remaining.

The third-down throw capped a 17-play, 90-yard drive that consumed most of the fourth quarter and gave HP a key victory in a thrilling District 10-6A opener.

“They were wanting to win so badly that they were making plays,” said HP head coach Randy Allen. “We had good endurance, and we wore them down, and it showed at the end. It was a great throw and a great catch.”

The Scots (3-1, 1-0) turned to Stephen Dieb for much of the tough yardage on the pivotal drive. Dieb rushed nine times for 53 yards on that possession, with four of his carries earning first downs. The final score provided some redemption for Henry Allen, who was 4-of-15 passing with one interception in the second half before the winning throw.

“North Mesquite is a very talented team. We could not stop them in the first half,” Randy Allen said. The defense “got better as the game went along. I couldn’t be more proud of the last two of three stops they made. They had to hang on until we could finally score.”

The Stallions used their size and speed advantage to punish the Scots in the first half. Ja’Quez Gooch scored on a 2-yard run on the opening possession, and he found a wide-open Anthony Richardson on a 62-yard scoring pass less than four minutes later, giving North Mesquite a 13-0 lead. A main reason for the success was third-down conversions, with the Stallions converting their first six opportunities.

However, the Scots blocked the extra point on the first touchdown, which wound up providing the final margin later on.

The HP offense found its footing late in the first quarter, when Henry Allen connected with Chris Buell on a flea-flicker for a 41-yard touchdown.

The teams exchanged touchdown drives during a wild second quarter. North Mesquite’s Dreshawn Minnieweather stretched the lead to 20-7 with 1-yard plunge early in the second quarter. He finished with a game-high 136 yards on 20 carries, but he got the ball just four times in the second half.

After a long kickoff return by J.T. Dooley, HP’s Jeffrey Kupp cut the deficit back to six points with a 2-yard scoring run early in the second quarter.

Gooch threw a 14-yard touchdown pass to Donte Howell for the Stallions. He completed his first 10 passes for 197 yards as North Mesquite controlled time of possession.

The defenses took over for most of the second half, as North Mesquite’s Stephen Turner intercepted a pass to stop the Scots’ first possession of the third quarter. HP’s biggest play prior to the final drive was a 38-yard completion from Henry Allen to Jon Welfelt on third-and-18 deep inside HP territory.

Gooch missed part of the third quarter with a cramp, then returning early in the final stanza only to have his first pass intercepted by HP’s Turner Rejebian at the Scots 10-yard line. That led directly to the winning drive.

“It ended up being a test of wills, and they came out on top,” said North Mesquite head coach Mike Robinson. “You’ve got two good football teams that slugged it out. It could have gone either way. Highland Park made the plays when they needed to be made, and we didn’t.”

The Scots will play their first true road game of the season next week when they travel to face Richardson Pearce. 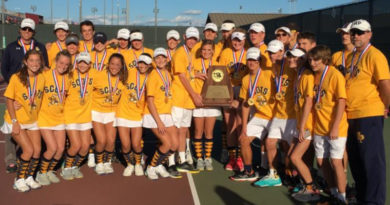 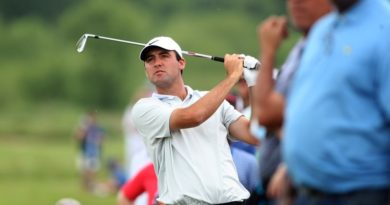