Jacob Palisch rushed for two first-quarter touchdowns and threw for another to lead Jesuit to a 43-0 win over W.T. White in the Battle for the Saddle game on Friday at Postell Stadium.

Palisch scored his third touchdown on a 6-yard run to put the Rangers on top 29-0 just before halftime. But it was the Jesuit defense that stole the show.

Jesuit (7-1, 5-0) recorded its third consecutive shutout, and forced two first half fumbles, both of which the Rangers converted into touchdowns to take an early 22-0 lead.

The attacking defense was responsible for the game’s first points. Jesuit backed the Longhorns up deep in their own territory before recording a safety when W.T. White’s Daniel Joof was tackled in the end zone with 9:45 left in the first quarter.

In a game that was delayed twice by lightning and rain, the Rangers had no problem executing their offensive game plan.

Because of the inclement weather and slippery ball, both teams were forced to run. The Rangers were the more effective of the two.

Adam Holtz and Max Loughborough combined for 229 yards on the ground, and Jesuit rushed for a total of 318 yards compared to the Longhorns’ 143.

“We had to run the football because of the driving rain,” said Hickman. “And we ran it very well and also held on to it. I’ve never coached or played in game with such hard rain.”

But Palisch and the Rangers did not totally abandon the passing game.

Ahead 9-0 late in the first quarter, Palisch connected with John Wunderlick from 23 yards out to put Jesuit in front 16-0.

Palisch rushed for 52 yards and three scores and completed seven passes for 94 yards and the touchdown to Wunderlick.

“He’s an impressive athlete,” said Hickman. “He’s lanky and fast and with his ability to run creates a problem for opposing defenses.”

Ahead 29-0, the Rangers stayed committed to the ground game in the second half as the rain continued to be a factor.

After a long, sustained drive to open the second half, Loughborough increased the lead to 36-0 when he scored on a 2-yard plunge with 6:22 left in the third quarter.

Evan Jackson capped another long drive for the Rangers when he scored on a 1-yard dive late in the fourth quarter to finish the scoring for the Rangers.

Joof led WTW with 52 rushing yards, while Jackson Fults added 51 yards on the ground and 77 through the air. The Longhorns have been outscored by a combined 99-7 in their past two games against the top teams in District 9-6A.

Jesuit will try to remain undefeated in districtplay when it travels to face fellow playoff contender Irving MacArthur on Friday. 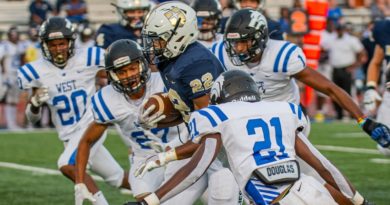 Rangers Crush Wolves in 9-6A Opener