GEORGETOWN — Highland Park was one controversial call, a couple of bad bounces, and a few seconds away from winning a state title on Saturday. Instead, the Lady Scots are the Class 6A runners-up for the second straight year.

In a game featuring many momentum changes and a couple of game-changing calls, Flower Mound rallied to beat Highland Park 2-1 in a shootout in the state title game.

The Lady Scots (24-3-2), playing in 11th state tournament and seeking their first title since 2012, jumped out to an early 1-0 lead on a Rachel Wasserman blast from 15 yards out, off an assist from Savanna Jones, at the 14:37 mark of the first half.

It could have very well been a 2-0 advantage for HP, but an earlier goal by Sarah O’Neal was nullified by an offside call.

Flower Mound (17-3-6) tied the score when Elena Reyna netted a shot off a cross early in the second half.

“We played well enough to win the match,” said HP head coach Stewart Brown. “Nothing can take away from how dedicated these girls are and how hard they played today and all season long.”

Both teams seemed fatigued after playing overtime in their semifinal games on Friday, and the game remained tied into the two overtime periods. But HP came to life at the end of the second overtime.

With two seconds remaining, the Lady Scots appeared to score the game-winning goal. But the referee ruled Flower Mound goalkeeper Caitlyn Aaron had control of the ball before it bounced into the back of the net.

“We created a lot of chances and were winning so many balls in the midfield,” said HP senior Maddi Thayer. “We just had a hard time finishing them off.”

With the shootout tied at 2-2, Aaron put the Lady Jaguars ahead with a shot to the top-left corner of the net. She then made a pivotal save and Flower Mound scored on the next shot to take a 4-2 lead.

Jones made it 4-3 on the ensuing shot. But Dawson Depperschmidt’s found the upper-right corner of the net to secure the win and championship for Flower Mound.

Brown said that although Saturday’s outcome was disappointing for the Lady Scots and their young roster, he’s optimistic as HP drops back into Class 5A next season.

“Our season was tremendous,” Brown said. “We played with seven sophomores, and there’s no reason why we won’t be back next year. The future is very bright for Highland Park.” 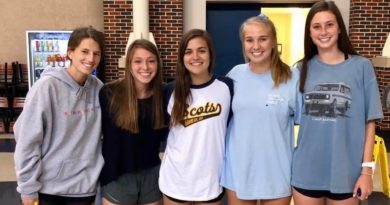