On a night when the Highland Park offense was almost impossible to stop, the defense did just enough.

The Scots outlasted previously unbeaten North Forney 63-42 on Friday at Highlander Stadium in a game that, as expected, was filled with offensive fireworks on both sides.

HP will carry a four-game winning streak into its bye week before hosting undefeated West Mesquite in a critical District 15-5A clash on Oct. 13.

The Scots (4-1, 2-0) used a balanced attack to amass 653 yards of total offense. They scored multiple touchdowns in each quarter, and reached the end zone on nine of 10 possessions overall.

The numbers suggest that with the season at the halfway point, the HP offense is doing much better than midseason form. The Scots have improved their scoring output in each of the past four games — all victories — and have committed just two turnovers all year.

“Our offense was so consistent. Every time they scored, we answered,” said HP head coach Randy Allen. “We had great execution, and when it wasn’t there, John Stephen made a play. He’d scramble and find somebody.”

Meanwhile, the HP defense struggled to stop a high-powered North Forney attack that averaged more than 62 points per game before Friday. However, during a seesaw fourth quarter, the Scots made a pivotal stop.

HP took a 56-42 lead following a drive in which the Scots converted twice on fourth down. Then North Forney drove the ball to midfield, when James Lightbourn intercepted a deflected pass for the game’s only turnover.

On the next play, Alexander scampered 52 yards for a touchdown to give the Scots their largest lead and put the game away.

“They fought hard all night, but they started making plays in the second half when most teams get tired,” Randy Allen said of the HP defense. “I’m really proud of what they did at the end.”

The Falcons (4-1, 1-1) nearly matched the Scots in terms of offensive output, thanks to a punishing ground game and some timely big plays. Dual-threat quarterback Colby Suits, who has verbally committed to Louisiana-Monroe, tossed four first-half touchdown passes — to four different receivers — and finished with 277 yards on just 10 completions. He also rushed for 67 yards and a score.

North Forney clearly is improved in its first season under new head coach Randy Jackson, who previously had success at Mesquite Poteet and Grapevine, among other stops. Last season, for example, the Scots pounded the Falcons 66-7.

“Our quarterback played great. We just tried to take what they gave us,” Jackson said. “We hung in there as long as we could. We just never could close the gap enough.”

The teams traded two early touchdowns apiece, and HP took its first lead after the defense forced a punt. The ensuing nine-play, 81-yard drive was capped by a 10-yard touchdown pass from Jones to Scully Jenevein to give the Scots their first lead at 21-14 with 5 minutes left in the first quarter.

HP never trailed again, but couldn’t put away the Falcons, either. North Forney turned the ball over on downs at the HP 22-yard line — following a 17-play drive — midway through the second quarter, and the Scots capitalized.

Cameron Reeves capped the next HP possession with a 5-yard touchdown run to give the Scots a 35-21 advantage late in the first half.

The Falcons tried to wear down the smaller HP defense with a ball-control attack, yet never was able to catch up.

Conner Allen took over in the second half by scoring touchdowns on three consecutive possessions — on a 13-yard run, a 25-yard reception, and a 1-yard plunge.

Alexander was also dynamic in the HP backfield. He rushed for 115 yards on 16 carries, and he grabbed three receptions for a game-high 134 yards, with the highlight coming on a 64-yard first-quarter touchdown catch.

Benner Page touched the ball only once, but made the most of the opportunity with a 2-yard scoring run in the first quarter. Ditto for Finn Corwin, who caught only one pass, but took it to the end zone early in the second quarter.

Calvin Ribera ran 21 times for 136 yards and a touchdown for North Forney. Corey Mayfield, a transfer from Parish Episcopal, caught three passes for a team-high 88 yards and a score. Jaydyn Barral, Jordan Carroll, and Michael Court also hauled in touchdown passes for the Falcons. 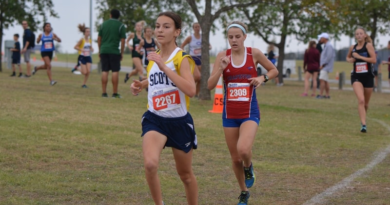