The 2017 Authors LIVE! season ended on a high note as an overflow crowd of more than 1,200 people packed Highland Park United Methodist Church to hear astronaut Scott Kelly discuss his new book Endurance: A Year in Space, A Lifetime of Discovery.

“We try to choose what our community is interested in,” Authors LIVE! agent Janet McLeod said.

Only two other Americans have spent more cumulative days in space than Scott Kelly, who has logged 520 days in orbit during his career. In 2016, he established a new American record for longest spaceflight when he returned to Earth after 340 days on the International Space Station.

The trip was notable for a study involving his twin brother, Mark, who also is an astronaut. Since twins have almost identical DNA, scientists were presented with a unique opportunity to measure the effects of long-term space travel by comparing Kelly to his brother back on Earth.

Kelly said he was not a great student growing up. When he was 18, he stumbled upon Tom Wolfe’s The Right Stuff, a book about the fighter pilots involved in America’s earliest attempts at space exploration. As Kelly read the book, he said, he identified with many of its characters — with one exception. He did not study or do his homework like they did.

“I thought to myself, ‘If I could solve that one problem, maybe I could be just like them,’” Kelly said.

That motivation led to a career as a Navy pilot, where he attained the rank of captain before retiring from active duty in 2012. Kelly said landing a fighter jet on an aircraft carrier is, in many ways, scarier than coming in for a landing from outer space.

He also discussed the difficulties of living in space, including feeling helpless when tragedies strike. Kelly was in space when a gunman shot his sister-in-law, U.S. Rep. Gabrielle Giffords.

He added that it was difficult to be away from family for so long, to essentially be at work all of the time, and to be stuck inside a relatively small space without the ability to go outdoors.

“All these things are hard, but that’s what also makes it so great, because it’s hard,” he said. “If I would have said ‘that was easy,’ I don’t think I would’ve had that same sense of achievement and satisfaction.”

During audience questions, Kelly shared his thoughts on aliens, which he said are likely, but not on Earth. He talked about space food, saying a granola breakfast concoction with milk and water is the only meal he’d consider at home. And, as far as whether he brought a fidget spinner to space; the answer is no.

Kelly ended by saying the international cooperation required to build a space station should remind people that great things are possible.

“I was absolutely inspired after spending a year in space,” he said. “If we can dream it, we can do it.” 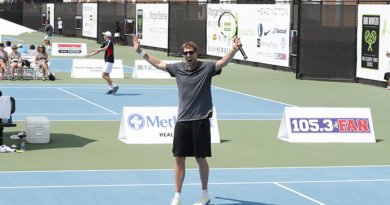