For more than a decade during the 2000s, Highland Park was the dominant program in Texas in girls swimming. Now the HP boys want to start a streak of their own.

The Blue Wave used depth and experience to claim its second consecutive boys team title on Saturday at the UIL Class 5A state swimming meet in Austin.

HP won just one event, but it came with a new 5A meet record in the 200-yard medley relay, with the quartet of Felix Van Cauwelaert, Henry Wang, Peter Paulus, and Omar Hmimy stopping the clock in 1 minute, 33.51 seconds in the opening race of the meet.

Later, the Blue Wave racked up enough podium finishes to edge Georgetown in the team standings. Van Cauwelaert was the runner-up in the 200 freestyle and came in fifth in the 500 free. Wang took silver in the 100 breaststroke, followed by Ethan Nguyen, who won bronze.

HP’s 200 freestyle relay squad of Van Cauwelaert, Paulus, Hmimy, and Nguyen also earned second, and established a new school record during the preliminary round on Friday.

Among the five medalists, only Van Cauwelaert and Hmimy are seniors. The rest will be back to try for a three-peat next year. 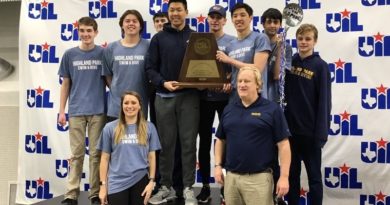 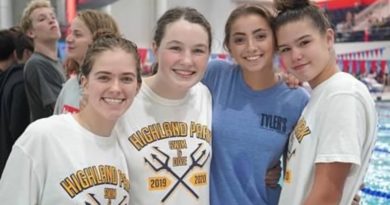