Throughout high school, Campbell Rolfe had a tradition.

The Highland Park High School graduate would rally her friend for beauty donations and then create goodie bags for teens in foster care going to prom.

Now in her freshman year at the University of Mississippi where she is studying biology, Rolfe isn’t ready to let the tradition die.

“I’ve learned from doing this that taking a small amount of time out of my day adds up to making another girl’s whole year maybe,” she said. “I think happiness and love should be shared to all, even though it might be materialistic things, such as makeup.”

To keep the tradition going, Rolfe used Venmo – a mobile payment service – to collect donations from friends and is assembling the goodie bags in her dorm room.

Rolfe said she decided to start creating the goodie bags after being inspired by a friends passion for CASA.

CASA, otherwise known as Court Appointed Special Advocate, is an organization of volunteers who stand up on behalf of abused or neglected children in foster care.

Rosanne Lewis, the public relations manager for Dallas CASA, said teens in foster care don’t usually have extra money for luxuries, such as lip gloss, mascara, or nail polish. Those who’d like to get involved by donating a prom dress, she said people can donate gently used formals to the Comerica Bank Prom Dress Drive through Feb. 28.

Read more about that drive by clicking here.

Dallas CASA will then create a treehouse boutique where dresses, jewelry, bags, and shoes will be on display for the girls to come in and “shop.”

“We have someone here pinning the dresses for alterations, people to help them shop, and makeup artists who help with hair and makeup,” Lewis added.

Each girl will leave with a goodie bag.

Rolfe said she thought goodie bags were a sweet surprise that reminded her of attending friends’ birthday parties.

“The idea of getting multiple little presents wrapped into one is something special,” she said.

Kristie Dixon, Dallas CASA program coordinator, said in addition to makeup, the goodie bags also include an uplifting message, an added touch to help the girls feel beautiful on their special day.

“We are so appreciative of Campbell’s giving heart,” Dixon said.

Throughout high school, Rolfe said what continued the tradition of making the bags was simply the satisfaction of delivering them to the Dallas CASA office and the anticipation for the girls’ prom nights.

“It’s something so easy and (not to mention) fun to do, and the fact that it is impactful makes me feel hopeful for these girls future,” she said. “I love prom, and I love getting all dolled up for it. I think everyone, no matter their circumstance, deserves to feel beautiful and special.”

Scots Take Momentum Into 6A Playoffs 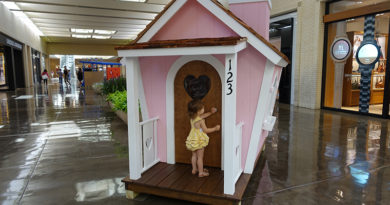 Volunteer Advocates Make Sure Children in Need Get a Voice