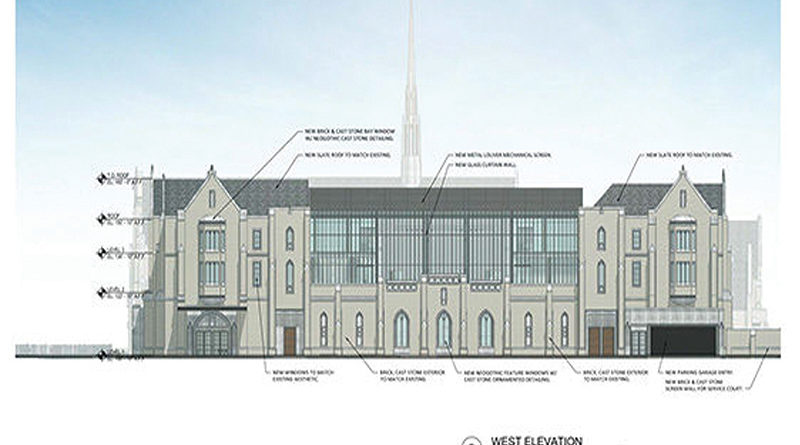 If approved, a public improvement agreement with the city of University Park would allow Highland Park Presbyterian Church to close a popular thoroughfare for two and a half years or more and use houses the church owns in the neighborhood as construction and business offices while redeveloping its University Boulevard campus.

City code does not prohibit residential buildings from being used as commercial offices, said UP communications director Steve Mace.

“Traffic generation is generally what triggers city oversite,” Mace said in an email. “In this case, you have a fixed number of people who will office at the agreed on addresses.”

The city’s planning and zoning commission approved in July a detailed site plan that would allow the church to demolish a structure on its University Boulevard property to construct a three-story building above an underground parking lot that will hold 135 parking spaces.

The detailed site plan and public improvement agreement will both go to the council for final approval at its Aug. 7 business meeting. Both have been a source of significant contention for the church’s neighbors.

The site plan is 15 years in the making.

Preliminary site plans, which were highly contested among neighbors who feared the redevelopment would overstep the church’s footprint and demand the closure of Shannon Lane, a popular thoroughfare street in the neighborhood, underwent several revisions over the years before being approved by council members earlier this year.

Talks of the public approvement agreement (which was referred to as a development agreement previously) had residents worried that it would be used to skirt the “keep it on your footprint” demands laid out by the planning and zoning commission before approving the plans.

“We are very cautious because they [church leaders] haven’t been straightforward through the entire process,” McFarlin Boulevard resident Bob Dill said at the time. “Everything we’ve found out [about the private development agreement] has been through the back door.”

In addition to the residential homes outside of the church’s footprint being used for construction purposes, Shannon Lane is expected to be closed for the duration of the project.

“The developer estimates the project will take 30 months to complete,” Mace said. “That timeline could go up or down depending on weather and other unforeseen factors.”

Mace also added there would be times when the construction site activity will impact traffic flow. When lane closures are necessary, when there is increased truck traffic, or large construction equipment is delivered, he said the city would use social media to provide the community with timely updates.

As a benefit to the city, the public improvement agreement states that the church will pay to upgrade the water line in Shannon Lane. The estimated value of the water line replacement is $120,000.

A cost-sharing agreement shows the city would contribute $36,194.85 to share in the cost for the church’s contractor to install a 42-inch storm sewer line in McFarlin between Park and Shannon.

In addition to the closing of Shannon Lane, parallel parking spaces on the west side of Park Street will be used for construction staging when the Highland Park Presbyterian Church Day School is not in session.

Renderings show a complete transformation of Elliott Hall into a bright, fresh, and open room designed to enhance the contemporary worship service. A new stage will sit in front of a window-lined wall that seamlessly blends into the Gothic Revival structure.

A new front door and drop off will create a grand entrance into the Hunt Building, and a patio along University Boulevard will echo the one in front of the main sanctuary.

The entrance will lead into a large, light-filled gathering space where a two-story mezzanine will create a welcoming area where guests can gather and fellowship.

Outside, the dated porte-cochere will be torn down, and the drop off location will be moved to Shannon Lane, creating a new, safer drop-off location on the west side of the building.

The proposed $73 million renovation also will create straight, widened connections throughout the campus.

University Park council members will meet at 4 p.m. in council chambers for a public work session before beginning their business meeting at 5 p.m.

Also to be discussed at Tuesday’s meeting will be a project to facilitate left turn bays in the 4100-4400 blocks of University Blvd; establish a school zone on Hillcrest Avenue; and a discussion about adopting the maximum proposed property tax rate for the next fiscal year. (Read the agenda by clicking here)

Stepping Up To The Microphone