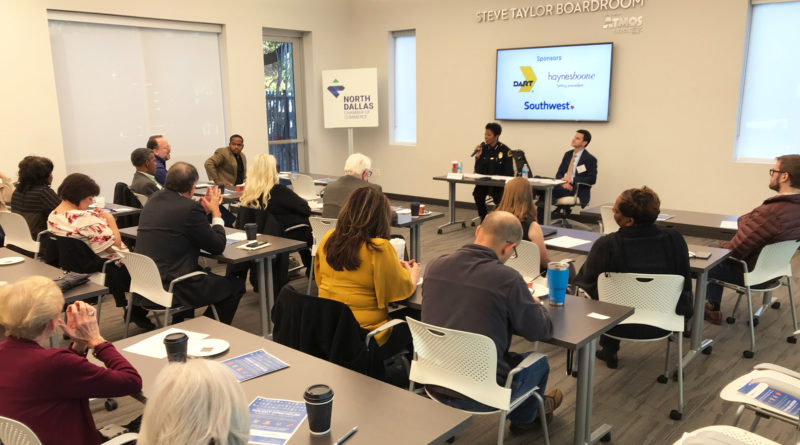 As Dallas police chief U. Renee Hall continues to acclimate herself in the city, she’s touting the benefits of collaboration and collective effort.

(ABOVE: Dallas Police Chief U. Renee Hall talks to the North Dallas Chamber of Commerce. Photos by Tim Glaze)

Hall was named chief of police in July 2017 and started work in her new city during September of that year.

As she told the North Dallas Chamber of Commerce at a recent breakfast, she’s still learning new ways to show members of the department and community how much the job means to her.

“It’s definitely been a learning curve,” she said. “But, I appreciate the challenge every day.”

During her short tenure, Hall has streamlined her command staff and faced a range of challenges, including reports of low department morale, an exodus of hundreds of officers to higher paying jobs in other cities, and the shooting death of Botham Jean, who was gunned down in his apartment by an off-duty officer.

Hall said herself and the staff are focused on curtailing holiday crime.

She said the department is focusing on high police visibility at shopping malls; keeping cars locked and belongings hidden; working relationships with liaison officers in the west Dallas patrol bureau; and a continued presence with the more than 300 apartment complexes in North Dallas.

“I have full confidence in our officers to carry out the duties expected of them,” Hall said. “But in order to be successful, it is imperative that we maintain open communications with everyone.”

Hall came from Detroit a little more than a year after the downtown shootings that killed six police officers and injured 11 others.

Between the perpetrator, Micah Johnson, and the Dallas SWAT and other officers, nearly 200 gunshots were fired on July 7, 2016.

Nearly three years later, the department continues to evolve in the aftermath of that tragic night.

“‘Resilience’ is the word that comes to mind when we think of the city of Dallas, in both the citizens and police department,” Hall said. “Through troubling times, we have seen the community step in immediately and support the department. There is no question the Dallas Police Department will always be there for our citizens – we will always be ‘Dallas Strong.’”

Hall added that it’s important that residents of Dallas know how invested she is in her job, and how her faith drives her.

“The sacrifices the members of the department make daily, I really appreciate that. I’m proud to be a part of this great organization.”

Founder of Northaven UMC Has Died