As Dallas City Council member Jennifer Gates runs for a fourth and final term, she’s focused on achieving progress with the Preston Center Parking Garage – a problem that often seems to have no acceptable solutions.

There’s plenty of talk about replacing it, but not nearly enough agreement.

(ABOVE: Illustrations show what a parking garage topped with a city park might look like in Preston Center. Courtesy photos)

“Many people want a live-work-play in [Preston Center],” Gates said. “Our ultimate vision is to bury the garage and put a park on top. I’d love it if we can get to the plan we’ve all dreamed about, and if I get re-elected in May, I’ll be spending the next two years of my life trying to improve that area.”

Gates is seeking a balance between taking proposals to the council this summer and achieving quality results that meet the needs of as many residents as possible.

“We’d rather take longer on everything and get it right than rush just to get something done,” she said. “It’s kind of embarrassing to look across the street and see how nice University Park looks after all of their development, and then on [the Dallas side] we’ve still got this ugly garage.”

The next parking garage task force meeting will be sometime in March. At a meeting in January, Mallory Baker with Walker Consultants talked about options.

Replacing the garage with an underground parking structure topped by a park would cost between $37.7 million and $44 million and provide 1,200 parking spaces at three levels, up from 800 spaces in the current garage.

That’s the “dream” of Gates: a park resting on top of an underground parking garage – similar to Klyde Warren Park sitting over Woodall Rogers Freeway.

The dream could remain out of reach with adjacent property owners, whose support is needed for whatever replacement is eventually built, favoring an alternative that would include 300 luxury apartments and an above ground garage on the site.

However, for the underground garage and park plan, she has already reserved $10 million in bond money and a commitment for matching funds from the North Central Texas Council of Governments.

Officials estimate construction of an underground garage with a park at street level would take 23 months – 17 for the garage and six months for the park.

After a meeting in September, a survey was sent out asking residents about their feelings on the garage’s current aesthetics. The majority of respondents found the overall appearance “inadequate” – 54 percent of everyone surveyed, specifically. From there, Walker Consultants began studying the technical feasibility of the underground parking structure.

Safety and overall functionality are areas of concern, as well.

“The current garage has a lot of access and safety problems,” Baker said. “We’re also thinking of what technology we can use in the new garage to help people, with lights and other necessities.”

Father’s Day May Be A Month Away, But Anytime’s A Good Time for Shameless Self-Promotion 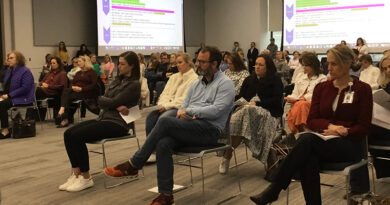