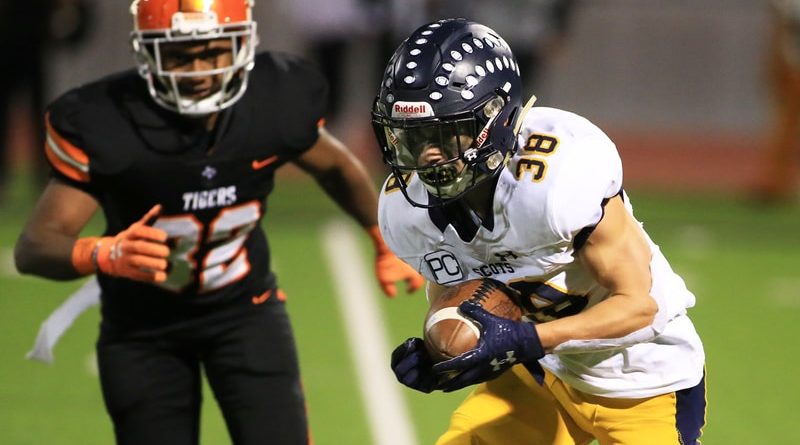 As it has done so many times in Allen’s two decades on the sidelines, Highland Park pulled out another late victory and moved one step closer to claiming the District 6-5A Div. I title in the process.

Chandler Morris scored on a short touchdown run in overtime to lift the Scots to a 42-35 win over Lancaster in a showdown between the league’s top two teams.

Allen has a career record of 400-88-6 in 39 years, including stints at Ballinger, Brownwood, and Abilene Cooper prior to his arrival at HP in 1999. He has won 247 games while leading the Scots.

“You don’t ever think about reaching a particular won-loss goal,” Allen said. “I’m honored and humbled by the fact that God gave me the opportunity to coach this long. We’ve had some great teams and great coaches.”

The Scots (8-1, 6-0) earned their sixth straight victory and can clinch the district championship next week when they host Mansfield Timberview in the regular-season finale.

HP’s win certainly wasn’t pretty. The Scots squandered a 21-point lead in the final 15 minutes, with Lancaster’s Tre Bradford tying the score on a 70-yard touchdown reception with 2:13 remaining.

Plus, HP committed four turnovers. Yet for all of those miscues, the big plays were there, too, against one of the most athletic defenses the Scots will face all year.

“You don’t win many games when you turn it over that much,” Allen said. “But our guys found a way to do it. We had some disappointments, so to see our guys rally, take the ball, and go down and score, it was just a team effort.”

On the game’s first play, Morris threw a 75-yard touchdown pass on a flea-flicker to Jack Curtis, who lined up as a tight end, found himself wide open, and rumbled to the end zone.

Then there was a 93-yard touchdown scamper by Hunter Heath, whose speed and elusiveness proved to be a major weapon. Heath, who had a 99-yard scoring run last week against Sunset, finished the game with 181 yards of total offense on just 15 touches, with two touchdowns.

Morris showcased his dual-threat ability by throwing for 288 yards and two scores, and also rushing for 103 yards on 19 attempts with two touchdowns.

His best throw of the game might have been a 39-yard scoring strike to Drew Scott late in the third quarter on a third-and-25 play, giving the Scots a 35-14 advantage.

“He’s a great competitor. He’s got that magic when the game is on the line,” Allen said of Morris. “He makes plays and leads our football team.”

HP never trailed in the game, and its defense was a significant reason why. The Tigers (7-2, 5-1) reached the red zone three times in the first quarter, but came away with no points.

Lancaster’s D’Andre Johnson recovered a muffed punt at the HP 11-yard line, which led to a missed field goal. On the next offensive snap, Barry Green pounced on a Scots fumble, then watched another kick miss the uprights.

The Tigers had consistently favorable field position and dominated time of possession in the first half, yet generally failed to capitalize on its scoring opportunities. Despite running almost twice as many offensive plays before halftime, Lancaster had 100 fewer yards.

And even when the Tigers closed the gap, the Scots had an answer. Lancaster scored its first touchdown on a 19-yard pass from Glenn Rice Jr. to LaTrell Caples on a fourth-down play midway through the second quarter. However, Heath reeled off his long touchdown run on the very next snap.

The Tigers seized momentum beginning with a second scoring pass from Rice to Caples that cut the deficit to 35-21 late in the third quarter.

The Scots tried another flea-flicker on the next play, but this time, Lancaster’s Andre Dibbles made a leaping interception. Later, HP bobbled the snap on a punt, leading to a 23-yard touchdown run by Bradford that made the score 35-28.

The Scots had multiple chances to seal the game late. An 11-play drive stalled on downs at the Lancaster 24, which was the catalyst for Bradford’s game-tying touchdown.

In the final minute, HP drove inside the Lancaster 15 and appeared within field-goal range, but instead attempted a risky pass to the corner of the end zone, which was intercepted by Lancaster’s Davion Hodge.

That sent the game to overtime, when four consecutive rushing plays for Morris enabled the Scots to regain the lead. That put the pressure on the Tigers, who committed a costly penalty and misfired on a pair of passes to end the game.

“We’ve got a resilient team,” said Lancaster head coach Chris Gilbert. “The trick play rattled us, so we had to regain our composure. But I was real proud of how our guys came back and fought the entire time. Now we’ll try to move forward.”

Rice finished with 268 passing yards and three touchdowns without an interception, for Lancaster, which saw its seven-game winning streak end. Bradford tallied 181 yards of total offense with three scores, and Caples caught nine passes for 156 yards with two touchdowns.