Walking out of the theater after catching an early screening of A Beautiful Day in the Neighborhood, one thing was clear: This movie was not about Mr. Rogers. Not really. It was more so about how his principles still apply when it comes to handling pain, discomfort, division, anger, stress, and whatever life might throw at us.

The movie tells a rather timely story of kindness triumphing over cynicism.

Written by Micah Fitzerman-Blue and Noah Harpster, the film is based on the true story of a real-life friendship between Fred Rogers and journalist Tom Junod. After a jaded magazine writer (Emmy winner Matthew Rhys) is assigned a profile of Fred Rogers, he overcomes his skepticism, learning about empathy, kindness, and decency from America’s most beloved neighbor.

You can read the Esquire article here.

To give you the basic run of the landscape, the journalist had a tough life. His mother died when he was younger. His father abandoned them when she was sick. And he has been filled with anger ever since. He now has a young child, travels too much for work, and is forced to deal with his father after years of not speaking with him.

While the journalist sets out to interview Mr. Rogers for a short 400-word profile, his cynicism, and unbelief that the real-life Fred Rogers is as glorified as his television character. But as he pushes for questions, Rogers pushes back with his own.

The dialogue between the two was incredibly touching–and yes, I cried.

To be clear, I would have loved this movie had it just been about Mr. Rogers. Tom Hanks is uncanny in the role, and while he brought his own charm to Mr. Rogers–let’s be clear, Tom Hanks and his gentle spirit were born for this role–but, I am glad this wasn’t another biopic about Mr. Rogers.

Well, for one, I saw the documentary Won’t You be my Neighbor and learned an awful lot about Fred Rogers and what made him tick, how he fearlessly challenged social norms that he didn’t believe in, and got all the details about the why behind his neighborhood. I didn’t need another movie to tell me that.

I got to take away something different from the film. I learned a lot about how I approach life when I am angry and do not know how to communicate my feelings. There is a scene in the movie where Mr. Rogers talks about outlets for anger and suggest things like swimming or pounding on the lower end of the piano.

While I do not have a piano, I recently tried turning up some screaming music in my car and belting out my frustrations–it worked! My throat was a little raw, though.

The other reason why I loved this movie was that it had a character I could relate to. The angry journalist.

I am not saying I am an angry person, but I do have pain in my heart and feelings that I have not figured out how to deal with. I saw myself in the character when he would lash out and in some of his unforgiveness.

I think we all will see a bit of ourselves in the character, especially during a time when division is spread so thick across this country and world.

I walked out of the movie, though, realizing that I also can see myself in Mr. Rogers.

There was a scene with his wife, Joanne, where she is asked what it is like to live with a saint. And she said that she didn’t like to use that word because a saint is someone we cannot attain to be like. How beautiful is that?

“Ready or Not” Itches Sinister Side of Humor 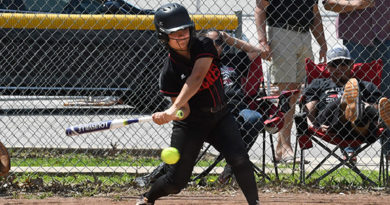 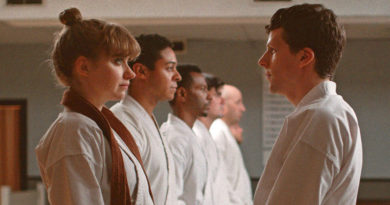 “The Art of Self Defense” Tackles Toxic Masculinity