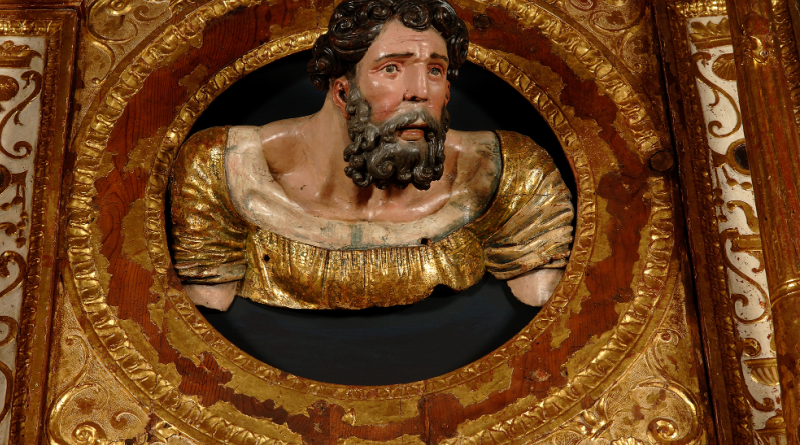 The Meadows Museum at SMU will open for its first major exhibition after COVID-19 shuttered museums last Spring.

It will open Sept. 20, with an exhibition exploring the art and history of the Spanish Renaissance sculptor Alonso Berruguete (c. 1488–1561), whose dramatic style—reflecting the more than ten years he spent in Italy in the early years of his career—revolutionized the arts of Spain.

Alonso Berruguete: First Sculptor of Renaissance Spain is the first exhibition devoted to the artist to be presented outside Spain. Originally scheduled to open in March, the exhibition was postponed due to the COVID-19 pandemic. Organized by the Meadows Museum and the National Gallery of Art, Washington, in collaboration with the Museo Nacional de Escultura, Valladolid, Spain, the exhibition includes some 45 paintings, sculptures, and works on paper drawn from a range of international collections.

In tandem with Berruguete’s work, the Meadows is also presenting an exhibition of photographs—originally from the Archivo Mas and now in the holdings of the museum—that provide the rare opportunity to see some of Berruguete’s larger commissions in their original locations. Berruguete Through the Lens: Photographs from a Barcelona Archive includes 31 black-and-white images from the early 20th century that reflect the work of Spaniards to create and preserve a visual record of Spain’s artistic patrimony. Both exhibitions will be on view through Jan. 10, 2021.

“We are thrilled that this exhibition is moving ahead despite delays related to the pandemic. This is an outstanding opportunity to introduce American audiences to Alonso Berruguete, one of Spain’s most important artists, but someone whose work is not well known in the U.S.,” said Mark A. Roglán, the Linda P. and William A. Custard Director of the Meadows Museum and Centennial Chair in the Meadows School of the Arts, SMU. “Taken together, these exhibitions provide parallel perspectives and opportunities for viewers, both to experience Berruguete’s art in person and, through the Archivo Mas photographs, to get a clearer impression of the artist’s works as they might have been when he first installed them.

“Organizing a major international loan exhibition during this time has been challenging. We are especially grateful to our partners at the National Gallery of Art and at the Museo Nacional de Escultura for helping us bring the Berruguete exhibition to fruition despite the pandemic-related complications, as well as to the Centro de Estudios Europa Hispánica/Center for Spain in America for their support of the accompanying exhibition catalogue, which is an important contribution to the English-language scholarship on this artist.”

Celebrated today primarily for his vibrantly expressive sculptures, Berruguete was also a skilled painter and draftsman. The son of the distinguished painter Pedro Berruguete, he was born around 1488 in a small town in northern Castile. Around the age of 17—not long after his father’s death—Berruguete made the life-altering decision to move to Italy, where he remained until 1518. During this time, he was first recorded in Rome, where he met Michelangelo. Like all young artists who came to Italy, he turned immediately to studying ancient sculpture and the works of the masters. He subsequently moved to Florence, where he became a successful painter. The few paintings that survive from his time in Italy—such as Madonna and Child with the Young Saint John the Baptist (c. 1514–17)—demonstrate that Berruguete was one of the pioneers of Mannerism, a style of exaggerated forms and supreme elegance that came into fashion during the 1510s.

After he returned to Spain, he first served as painter to the court of Charles I, before moving to Valladolid, where he established his workshop and turned his attention to producing retablos, or altarpieces. He is known to have produced at least a half dozen retablos for churches and private chapels over his career, including the retablo mayor (high altarpiece) for San Benito el Real in Valladolid, Spain. As Berruguete’s fame spread, he undertook a string of prestigious commissions in Toledo, many for his principal patron there, the powerful archbishop Cardinal Juan Pardo de Tavera. Some of Berruguete’s most impactful works decorate the cathedral’s choir, including the wood reliefs on the seatbacks. Berruguete died in 1561 as he was putting the finishing touches on the archbishop’s marble tomb—just 16 years before El Greco’s arrival in the city.

Alonso Berruguete: First Sculptor of Renaissance Spain presents a range of works from the artist’s career. It opens with a group of paintings and sculptures representing the artistic world in which Berruguete grew up, a world dominated by artists working in the prevailing Hispano-Flemish style. Reflecting the influence of artists from Flanders and other places in northern Europe, the style is characterized by minute details, complicated patterns of angular drapery, elongated bodily features, and the use of pointed arches and other elements of Gothic architecture. Berruguete would have learned the particulars of the style from his father, one of the leading Hispano-Flemish painters. Pedro is represented in the exhibition with one of his most accomplished paintings, Virgin and Child Enthroned (c. 1500).

While in Italy, Berruguete also honed his draftsmanship, and he would become the first Spanish artist to create a recognizable body of drawings—although only about 25 of his drawings survive. A number of these are included in the exhibition, demonstrating how he used drawings to plan his compositions and communicate his designs to assistants. These range in type from quick pen-and-ink sketches to more controlled works in chalk and other media, such as Job or Levi (after c. 1525).

Most of the works in the exhibition were created after Berruguete’s return to Spain in 1518, with an emphasis on his retablos. In works like The Sacrifice of Isaac (1526–1533), his radical style is on full display: figures seem to be in constant motion, their faces contorted by intense expression. Berruguete recognized that there was a place in his native Castile for the art he had learned in Italy—an art of manipulating the human form to create heightened emotion. The exhibition also features a group of recently conserved sculptures, The Adoration of the Magi (c. 1537–38), from a smaller retablo that Berruguete made for a private chapel in the church of Santiago Apóstol, Valladolid.

The centerpiece of the exhibition is a selection of his best sculptures—all carved in wood and painted and gilded—from the retablo mayor of San Benito el Real in Valladolid, Spain, now in the collection of the city’s Museo Nacional de Escultura. One section of the enormous altarpiece is loosely reconstructed in the exhibition to give visitors some idea of how the sculptures were originally installed. An accompanying film showcases those works by Berruguete that cannot travel, such as his alabaster group of the Transfiguration of Christ that crowns the choir of Toledo cathedral. Drone footage provides stunning views of these powerful works.

Alonso Berruguete: First Sculptor of Renaissance Spain is curated at the Meadows by Wendy Sepponen, the Museum’s 2018–20 Mellon Curatorial Fellow. The exhibition was also curated by C. D. Dickerson III, curator and head of sculpture and decorative arts, National Gallery of Art, Washington, and Mark McDonald, curator of drawings and prints, The Metropolitan Museum of Art. Prior to the presentation at the Meadows Museum, the exhibition was on view at the National Gallery of Art, Washington, from October 13, 2019–February 17, 2020. As a center for Spanish art, the exhibition at the Meadows includes more works by other Spanish artists to provide context for Berruguete’s work, and devotes more space to his workshop and processes. It will also include four works on paper from the Uffizi Gallery that were not included in the NGA presentation, among other additional works.

Archivo Mas, named for its founder, the Barcelona-based photographer Adolf Mas Ginestà (1860–1936), has been an essential tool for historians of Spanish art and architecture for nearly a century. Initially, Mas was part of Barcelona’s thriving modernist art community, where he collaborated with many of the most celebrated architects of the period, such as Antoni Gaudí (1852–1926) and Josep Puig i Cadafalch (1867–1956). A friendship with the influential art historian and architect José Gudiol Ricart (1904–1985) eventually led to an expanded and more systematic documentation of Spain’s artistic patrimony. Much like the pre-war photographs of works by Berruguete in situ, the Archivo Mas images give rare glimpses into the state of preservation of pre-modern buildings and their contents during the early twentieth century. These are often an architectural historian’s only guide in establishing the modern restoration history of existing structures.

In 1941, Mas’s archive of some 350,000 negatives was acquired by Teresa Amatller Cros (1873–1960), who incorporated the archive into Fundació Institut Amatller d’Art Hispànic in Barcelona, and hired José Guidol Ricart as its first director. Guidol saw an example in New York’s Frick Collection, which has an important role as an active archive and library alongside its public presentation of art. Like slide libraries and other visual resource centers, these photographic archives proved an important reference for students of art history in the days before the internet and accessible travel abroad. While SMU was not originally among the universities to acquire Archivo Mas images, in 2003 the Meadows Museum was approached by the Nelson-Atkins Museum in Kansas City, which, as part of a deaccessioning process, gave its collection of some 10,000 Archivo Mas photographs of Spain and Italy to the Meadows Museum.

Typically used for study purposes by museum staff, this is the first time selections from this archive have been exhibited. As a companion exhibition to Alonso Berruguete: First Sculptor of Renaissance Spain, this installation gives essential insight into the experience of Berruguete’s work, drawn from photos taken over several years leading up to and into the Spanish Civil War (1936–1939). The photographs are crucial documentation of buildings prior to the destruction suffered from the war’s aerial bombardments. In particular, some of the photographs in this exhibition feature Berruguete’s sculpture before it was damaged or removed during the war.