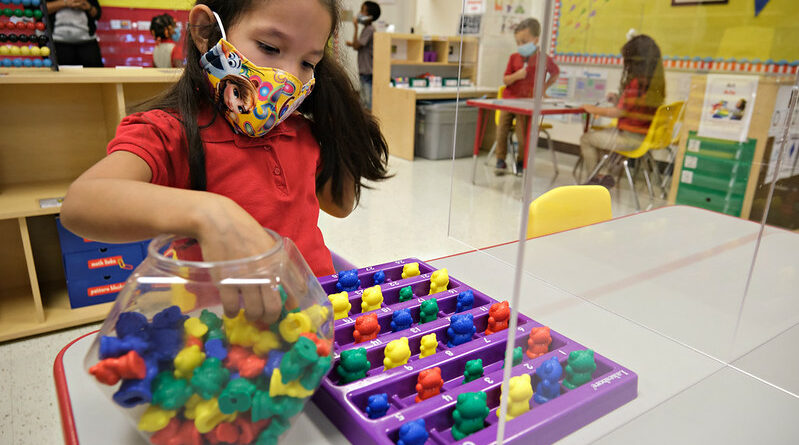 Dallas County health officials moved the county back to red on its color-coded chart designed to help the public determine the risk level associated with various activities during the pandemic last week, and many parents immediately began asking – what does this mean for schools?

And it wasn’t just parents – Dallas ISD school board trustees were also trying to figure out what exactly the district would do in light of this – after all, the move from orange to red also meant that some activities – like youth sports, gathering in enclosed spaces, and even being a spectator at events – were considered unsafe now that the county was, as Dallas County Judge Clay Jenkins said, on the cusp of “a new and quickly escalating wave of COVID-19 cases.”

Two trustees took to Facebook to talk with constituents.

“I would personally recommend that any families who are able to switch back to virtual learning consider doing so,” said trustee Dan Micciche.

Trustee Ben Mackey conferred with district staff to answer some frequently asked questions he was receiving from constituents, and explained that it was unlikely that the district would be able to switch back to virtual only on its own steam.

“The Texas Education Agency authority supersedes Dallas County guidance,” he explained. “Currently, TEA is requiring all Texas districts to begin phasing in students for on campus instruction as of Oct. 6 and increasing to allow every student who wants to be back to be on campus by Nov. 4. Dallas ISD does not currently have an avenue to decide to go back to full virtual currently.”

The district could, he said, choose to go back to virtual only on its own, but risks state funding if it does so.

“That said, I believe we need to relentlessly explore every possible way to meet the county health guidance and move to virtual only school while the county is on Risk Level Red,” Mackey added. “I understand that there are challenges with that, but we must place the health and safety of our students, staff, and families first.”

On Friday, the district’s COVID-19 dashboard indicated that there were now 278 cases throughout the district – 112 among campus staff, 20 among central staff, and 146 among students.

Dallas ISD said it will continue to offer both on-campus and virtual learning based on parent preference.

“The district remains committed to following extensive safety protocols, which include social distancing in classrooms, hallways, offices, and elevators; masks are required for every staff member and student throughout the day; hand washing practices are regular parts of everyone’s day; thorough cleanings are scheduled at each campus and district facility; and contact tracing measures are in place and being followed,” a statement released last week said. “If parents want to change from on-campus to virtual learning, they are asked to contact their child’s school.”

Christina Childress, a parent of three Sudie Williams students and a co-founder of the Parent Advocates for Children and Teachers group, said she was “very concerned” and that she has already been brainstorming with Mackey, and her group is ready to begin lobbying the TEA and Gov. Greg Abbott to give counties experiencing new waves of COVID-19 more control over whether schools remain open.

But she also says she and other parents are frustrated with the messaging from the district, which seemed to indicate early on that it would put up more of a fight about reopening if it wasn’t safe to do so, but now says it will remain open for on-campus instruction.

“Well, if the people who keep telling you they’ll do x if y happens, then when y happens say “oh actually we’re not doing x” there comes a point when you can’t believe anything they tell you. That’s how many parents and teachers feel right now,” Childress said. “I want to be able to trust what the district is telling us and that they’re prioritizing student safety. Because they have not been consistent in following through with what they say they’ll do, I don’t trust them.”

“In addition to being able to trust what they actually say, they are leaving way too much unsaid which makes it even harder to feel like we know what is actually going on,” she added.

“The safety of our students and staff remains our top priority,” the district said in its statement. “We appreciate our students, parents and staff for their understanding and flexibility during these unprecedented times.”

In addition to the worries around safety, the district is also in the process of determining exactly how much so-called COVID-slide has impacted student progress. In their most recent board briefing, trustees were led through a discussion of what the district might do to address the losses from a spring of makeshift, sudden virtual instruction followed by the summer – which usually sees a bit of a slide on its own.

Chief of Staff Pam Lear and Deputy Chief of Academics Derek Little explained to trustees that as the district continues to distill the data it has gleaned from beginning of the year assessments done district-wide, staff was also exploring additional ways to help students get the students struggling the most a better chance at catching back up.

Several options were presented, including an intercession calendar that would begin the year earlier and end later, but only for targeted students. This plan, Lear and Little said, would potentially reduce the summer learning loss because the summer would be shorter.

A third option would not change the school calendar much at all, but would offer longer summer school sessions for specific students, and would expand summer school options.

Both Lear and Little reiterated that the usual 180-day calendar would always be the base, but that additional days would be optional and voluntary.

“We are looking to provide access to learning experiences beyond what students currently have,” Little said. “And they should be experiences that ignite a student’s passion, promote student agency, and require deep thinking. This would not be just another day of school.”

But nothing will move forward without a lot of discussion – with teachers, parents, and school leaders. The district plans surveys and focus groups as it hones in on recommendations for the board. In November and December, the district will reach out to families and community members for their input as well.

“While we have possible options to talk about today, the truth is that this extensive stakeholder feedback process we are about to start will heavily guide how we end up moving forward,” Lear told the board.

Trustees will vote on the 2021-2022 calendar in January. You can see the district’s briefing presentation here.