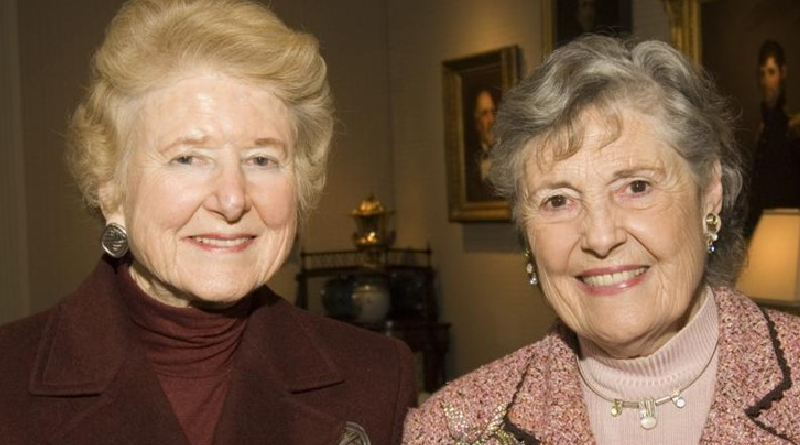 She’s described by the Dallas Museum of Art’s Eugene McDermott Director Dr. Agustín Arteaga, as having a “warm and enormous heart,” and that heart led Edith Jones O’Donnell, along with her husband Peter, to embrace philanthropy that benefitted education and the arts in Dallas.

O’Donnell, who was born in Abilene and graduated from Hockaday in 1944, died Saturday night. She was 94.

The O’Donnells, who live in Bluffview, co-founded their eponymous foundation in 1957, giving more than $780 million over the years – often anonymously.

One exception was a $17 million gift to the University of Texas at Dallas which, combined with an additional $10 million from the UT system, created the Edith O’Donnell Institute of Art History in 2014.

The institute said its founding director, Rick Bretell (who died in July), once said that she had “an unflinching belief that human creativity in the arts is essential for a healthy culture.”

“Her generosity was truly something, and her vision to see the importance of funding our institute was a rarity, and something that for UTD was very much needed,” said current director Michael Thomas.

In 1987, she and Mary Ellen “Mitch” Jericho (who died in June) began a chapter of Young Audiences, forever connecting the two with not only art, but the use of art in social and emotional learning.

“As we mourn the loss of our beloved co-founder Edith O’Donnell, we cherish the memories of her creative spirit and philanthropic passion,” Big Thought said in a statement. “Edith’s leadership and support created the pathway for countless youth, educators and residents to experience and learn from the arts. We will remain forever grateful for Edith’s transformative impact on Big Thought and the entire DFW arts and culture community.”

But it was perhaps the Dallas Museum of Art that commanded O’Donnell’s attention the longest. She support spanned 70 years, starting in 1952 when she became a volunteer for the museum, doing a 10-year stint as a docent, as well as participating in various committees.

In 2013, the O’Donnells personally, and through their foundation, made a multiyear gift of $9 million to reestablish the DMA’s free general admission policy and to help digitize the museum’s collection – bringing art to even more in the Dallas area.

“This donation enabled the DMA to become one of the world’s most open museums to both visitors in the city and web users around the globe,” the museum said in a statement. “Since the Museum’s return to free general admission in 2013, the DMA has welcomed more than 5 million visitors. The four-year effort to digitize the Museum’s entire collection, which began in 2014, increased the number of artworks published in the DMA’s online collection database from 7,000 to over 25,000 objects.”

That contribution toward the digitization of the museum’s collection has become even more important during the pandemic, allowing visitors to view and learn about art from the comfort of their homes while the DMA was closed for five months.

This year, the DMA received another gift of $1.42 million from the O’Donnell Foundation to support expanding digital transformation initiatives, including a comprehensive redevelopment of the museum’s website, infrastructure and systems upgrades, and the development of a constituent relationship management solution.

“Edith O’Donnell was unwavering in her support, and her lifetime of supreme generosity to her beloved DMA always came from her warm and enormous heart,” said Arteaga. “From her first encounter with the Museum as a volunteer and docent, she remained passionate about giving all that she could to her community, especially to the youngest members of our city, the children, providing generations of Texans with the opportunity and access to enjoy, understand, and create art.

“Her warm and spirited philanthropy will have a lasting effect on our institution and on all citizens of Dallas.”

In addition to the DMA, Big Thought, and the Institute, O’Donnell supported the AT&T Performing Arts Center, Booker T. Washington High School for the Performing and Visual Arts, The Dallas Opera, the Dallas Symphony Orchestra, the Meadows School of the Arts at Southern Methodist University, and the College of Fine Arts at UT Austin.

O’Donnell is survived by her husband and daughters, Ann Stevanovich of Dallas, Carol Kradolfer of Boise, Idaho, Ruth Mutch of Dallas, and six grandchildren.

Services are pending. In lieu of flowers, the Dallas Morning News reports that the family suggests contributions to the Edith O’Donnell Institute of Art History, the Dallas Museum of Art, or Big Thought.

Click here to see a profile of the O’Donnells, as well as a video, courtesy the Texas State History Museum Foundation.