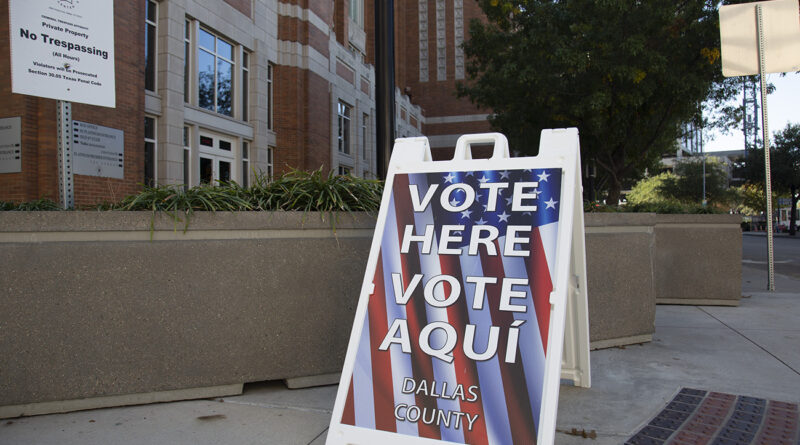 Incumbent Dustin Marshall has run for the Dallas ISD District 2 trustee seat three times. And each of those times, he’s found himself in a runoff election.

The Nov. 3 election results found challenger Nancy Rodriguez holding a lead throughout the evening with around 45% of the vote to Marshall’s 40%. In 2017, Marshall upended then-challenger Lori Kirkpatrick in a runoff election 71% to 29% – after she came within 23 votes of the required 50% threshold to beat him in the general election.

“While Tuesday’s results were heartening, we still face a runoff, and the incumbent will be sure to deploy the vast sums he has raised from his millionaire and billionaire friends – many of whom have never seen the inside of a DISD school and never will – while we will continue to rely on you, the parents and neighbors right here in Dallas for whom what happens in DISD is immediate and vital,” Rodriguez told supporters Nov. 5.

Marshall said that he’s still confident that his campaign can chalk up another runoff win.

“We’ve been in this situation multiple times before, and we’ve run very strong and victorious runoff campaigns,” he said. “This runoff election will be no different. It’s unfortunate that the delay of the election due to COVID put a school board race on a partisan presidential ballot where most voters have never voted in a school board race.”

Marshall said that his campaign is confident that the runoff voters will be a different animal – “the electorate is made up of voters who are incredibly engaged and knowledgeable about the amazing progress underway in DISD,” he said – and that the outcome would be different.

SMU political science professor Matthew Wilson agrees that the electorate the two will face in December will be quite different from the stridently partisan one they faced in November. Typically, municipal and school board elections are held in May and are considered to be nonpartisan in nature.

Wilson said he’s also unsurprised that there have been so many runoff elections in District 2, which resembles a misshapen donut with a Park Cities-sized hole in the middle, and straddles U.S. 75, encompassing parts of North Dallas and East Dallas.

“You have two very different sets of voters with very different kinds of priorities and approaches to public education,” he said. “So it’s not surprising then that there were some fairly stark differences of opinion on education issues represented within that district.”

Our conversation with Wilson follows.

PN: This was a discussion even four or five years ago, the potential to move school board elections to November, versus the lower-turnout May. What are some of the pros and cons of moving what is traditionally a nonpartisan election to what can be a more partisan ballot – especially this year?

If you have them in November, you’ll have far more voters having a say, but a lot of those voters will be not very knowledgeable about school board politics and school board issues. So that’s really the kind of central trade-off involved there.

PN: Right after the election the incumbent, Dustin Marshall, even made a statement to that effect – that a November election brings out a lot of voters, but not necessarily voters who know the school district. But he’s also taken a bit of heat about making that statement, particularly from his opponent’s core following. Was it wise to articulate that?

Wilson: Well, you know, he’s speaking to that subset of voters who are actually going to participate in the runoff election – he is giving them credit. He is saying, “You guys who are going to participate in the runoff are the informed voters. You’re a higher class of voter,” if you will. So it’s probably not bad politics in the sense that he’s crediting and flattering the very people who are going to decide the runoff.

PN: The move to the November ballot was kind of borne of necessity, thanks to the pandemic. But do you think that now that the district has had an election in November – and on a hyperpartisan ballot at that – we’re seeing why they have been reluctant to ever do it prior to now?

Wilson: I think that having it in the spring makes it a less partisan electoral process. It also keeps the attention focused on the school board races, as opposed to having them as an afterthought to a presidential year or senatorial or congressional campaign. So, yeah, I think there are very good reasons why they have kept it in the spring because school boards deal with a particular set of issues and are of concern to a particular subset of the electorate. That’s going to be very different from the broader partisan political context.

PN: I get asked frequently why it seems like District 2 is so runoff-prone, and I have to describe where it is to kind of explain. The voters in East Dallas can be quite different from the voters in the Preston Hollow and North Dallas area. Do you think that’s what’s driving that?

Wilson: You have two very different sets of voters with very different kinds of priorities and approaches to public education. So it’s not surprising then that there were some fairly stark differences of opinion on education issues represented within that district.

PN: You usually see a lower turnout in May, and an even lower turnout in a June runoff. But this runoff, you’re competing with the holidays, a great deal of hangover or malaise from a very arduous presidential election – but an election that energized a lot of voters. Could we see a different outcome in terms of turnout in a December runoff?

Wilson: Oh, I fully expect a huge drop-off in the number of people participating in this will be very anticlimactic after all of the intensity of the presidential race and the other partisan races in Texas. So it will be really confined to people who genuinely care about the school board – and you know, maybe that’s a good thing. Maybe that’s a bad thing. It depends on your perspective. But I think that you’re going to see a much, much smaller runoff election.