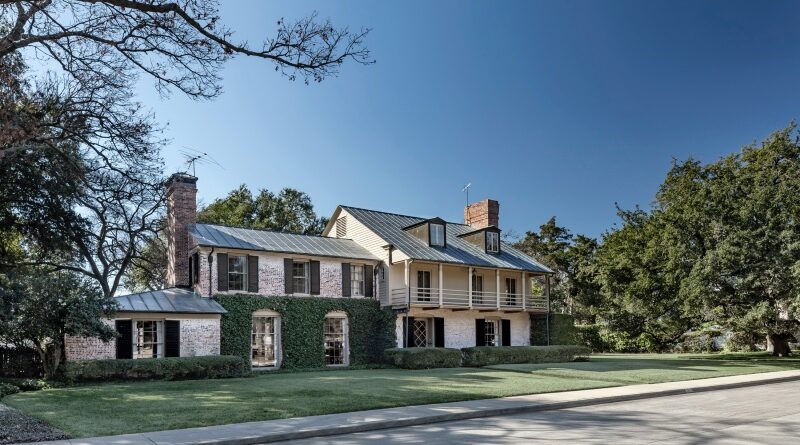 The historic 1933 Elbert Williams House at 3805 McFarlin Boulevard in University Park went under contract to Jan and Trevor Rees-Jones the evening of Dec. 3.

The sellers of the house are the Locke family, (the children of Eugene Locke and Adele Locke Seybold) who have owned the home since 1955. The house had been listed by Allie Beth Allman since late 2019 and had come to the attention of the Park Cities Historic and Preservation Society (PCHPS) as a likely candidate for demolition because of its location on a 1.15-acre lot on Turtle Creek.

In an effort to bring attention to the importance of the notable piece of Texas Modern Regional architecture, University Park architect Bobby Clark came up with the idea for (and PCHPS funded the publication) the book A House for Texas, (authored by local architect Larry Good and photographer Charles Davis Smith), to document the home and tell the story of its design.

The Rees-Jones family had recently completed their new home on the property immediately south across Turtle Creek from the Locke house and shared a passion for the preservation of the historic home. Although the ultimate use and occupancy of the Elbert Williams/Locke House is yet to be determined by the new owners, Rees-Jones has made the commitment to preserve the house rather than demolish it.

The Park Cities Historic and Preservation Society believes this may be the first time that an endangered historic residential landmark has been saved from the wrecking ball in the Park Cities.

The book A House for Texas is available through the Park Cities Historic and Preservation Society website. It’s also available from Interabang Books at 5700 W. Lovers Lane.

There have been two virtual discussions by Larry Good and Charles Davis Smith, moderated by Bobby Clark, about the book and the Elbert Williams House and its significance.

Links to those virtual discussions can be found on the PCHPS website.