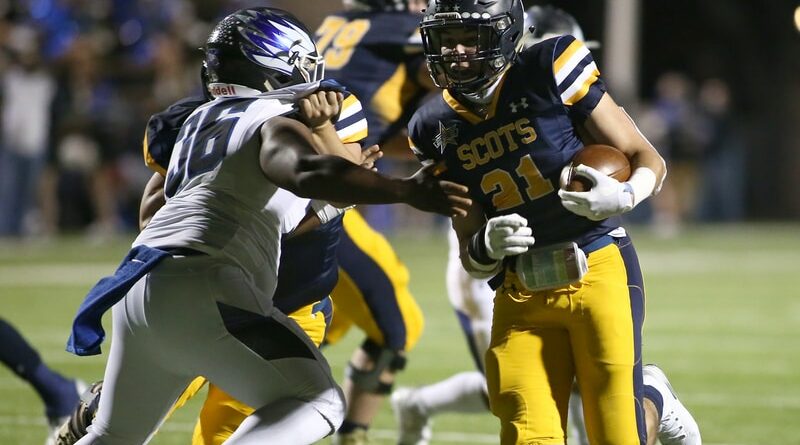 Highland Park is familiar with playing in Arlington on the weekend before Christmas. However, it’s usually reserved for state championship games, rather than the area round playoffs.

In this reshuffled 2020 season, the Scots have proven themselves capable of adapting to just about any scenario. Their unbeaten campaign surges ahead on Thursday with a matchup against familiar postseason foe Frisco Independence.

The second-round game will take place at Globe Life Park, the reconfigured former home of the Texas Rangers — and just down the street from HP’s frequent postseason home at AT&T Stadium.

The Scots (9-0) have rolled past the Knights in each of their two prior playoff meetings, in the area round in 2016 and the bi-district round in 2018.

HP parlayed another fast start into a 56-21 thrashing of New Caney in its playoff opener last week. The Scots surged to a 28-0 lead before the Eagles even gained a first down. They have outscored their last five opponents by a combined 138-0 in the first quarter, and they have allowed only 27 first-half points all season.

Schager has amassed 2,477 passing yards and 20 touchdowns this season, while Ghobriel has emerged as the team’s rushing leader with 660 yards and 12 scores.

Independence needed to win a coin flip to secure a playoff berth as part of a convoluted tiebreaker in District 5-5A. However, the Knights (5-4) capitalized on the opportunity with a convincing 58-10 victory over Woodrow Wilson a week ago.

After an 0-3 start, Independence has claimed five of its last six games behind a high-powered offense. The Knights have scored at least 55 points in all five of their wins.

Dual-threat quarterback Braylon Braxton leads Independence with 800 rushing yards and 13 touchdowns, and he’s also thrown for 21 scores with just four interceptions. Other top playmakers for the Knights include running back Dwayne Orr and receiver Elijah Arroyo.

An HP victory would set up a rematch against either Magnolia or Frisco Lone Star next week in the Region II semifinals.