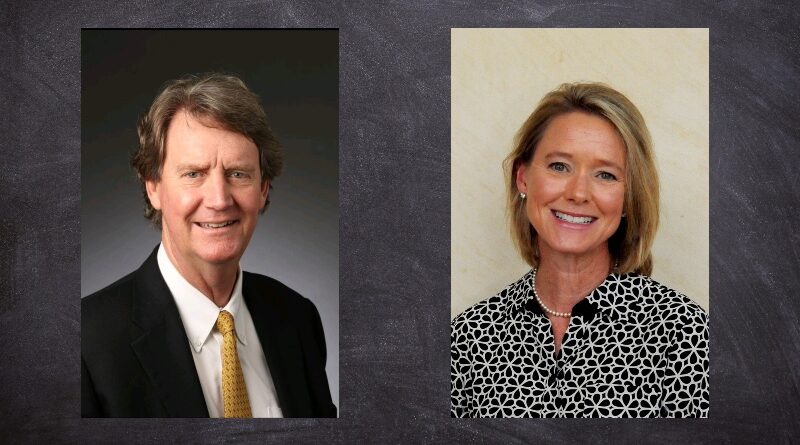 The Highland Park ISD school board will get a new look in 2020 with long-serving trustees not seeking reelection in May. (PHOTOS: Courtesy, and Thayer O’Brien)
Park Cities Schools
December 21, 2020December 21, 2020 Kirk Dooley 2 Comments

The Highland Park ISD Board of Trustees will get some new faces in late spring after two longtime trustees announced that they wouldn’t seek reelection to their seats.

Jim Hitzelberger and Lee Michaels, the two trustees whose terms expire in 2021, recently announced their plans.

“It has been an honor to represent this great school district for 12 years,” said Hitzelberger, who was first elected in 2007 and has served as its president since 2017. “I graduated from Highland Park High School, as did my father, my two brothers, my three sons, my three cousins, and various nieces and nephews. Being a part of this district has been a labor of love and a family tradition.”

He’s a 1974 graduate of Highland Park High School, according to his biography on the school district’s website.

While serving on the board, Hitzelberger helped lead the district through the 2015 bond election, a $361.4 million bond package approved by a margin of 55-45 percent.

Hitzelberger, an attorney and mediator, will miss the interaction with school staff, teachers, and administrators. Still, he looks forward to spending more time with his wife, Dr. Laurie Hitzelberger, the retired principal of Highland Park Middle School and McCulloch Intermediate School. The two were honored as the Grand Marshals of the 2020 Park Cities Fourth of July Parade and will be featured in the 2021 parade.

“It has been my privilege to serve in this extraordinary community and to give back to the schools that made such an impact in the lives of my own two daughters,” Michaels said. “It has been my honor to serve with such a dedicated group of trustees, administrators, and educators whose true goal is the education and wellbeing of every student every day.”

Michaels looks forward to traveling more with her husband, Paul, and two daughters, both college graduates. She will continue her leadership on nonprofit boards and maintain her community service with several Dallas charities.

Michaels serves on the executive board of the Dallas Holocaust and Human Rights Museum and has served as president of the board of CARE Dallas, a nonprofit whose mission is to provide education and raise awareness about substance use disorders, according to her biography.

Maryjane Bonfield and Doug Woodward plan to run for the seats.

Bonfield graduated from Highland Park High School in 1996 and was a Blanket Award recipient.

“As a child in HPISD schools, I was taught ‘Enter to Learn, Go Forth to Serve.’ As an adult, I have committed myself to serving the community and the school system that have given me so much,” said Bonfield, a mother of three children in district schools. “I am running because I want to preserve and further HPISD’s tradition of excellence, both for my children and for those yet to come.”

She has served as Hyer PTA president, chair of the fifth Elementary PTO Establishment Committee, board member of the Highland Park Education Foundation, and member of the district’s Facilities Advisory Committee and Technology Committee.

Woodward served on the district’s boundary rezoning committee, serves on the Highland Park Education Foundation on the finance and scholarship committees, and on the retail advisory committee for the city of University Park. He’s also involved with Highland Park United Methodist Church.

2 thoughts on “Hitzelberger, Michaels Not Seeking Reelection in HPISD”