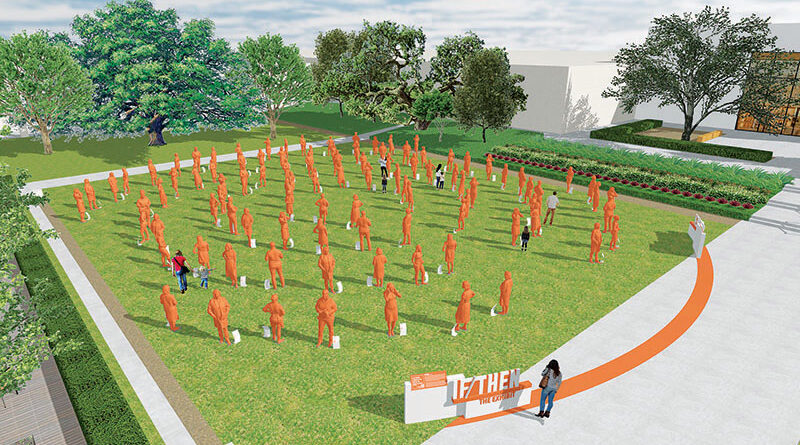 Orange is the new white lab coat, only much, much better

The 3-D printed statues produced after scanning 125 female innovators named American Association for the Advancement of Science IF/THEN Ambassadors in 2019 have at least this much in common – they are orange.

But leaders of backer Lyda Hill Philanthropies see in them the diversity needed to inspire girls and advance women in STEM (science, technology, engineering, and mathematics) careers.

Each statue has a plaque with an ambassador’s name and career and a QR code to the IF/THEN Collection, a large, free online repository of photos, videos, and stories of women in the program and their journeys to get to where they are today.

“There’s great photos of some of the ambassadors together, so it gives the visual rainbow of diversity represented by the group,” said Jennifer Makins, one of 10 ambassadors selected from North Texas and director of STEM education at the Parish Episcopal School.

“The other thing, really powerful too, is just showing kids that if you have an interest in STEM, you can find a way,” she said. “We have old and some with physical limitations, but they have a passion for STEM, and the kids can see it.”

The statues went on display at NorthPark Center in 2020 before giving way to holiday decorations and displays. Aviation-themed ones were expected to go up at Dallas Love Field in December, and plans to install some at Central Park in New York City were in the works.

“Statues were nowhere on our radar when we launched two years ago,” said Magaret Black, director of Lyda Hill Philanthropies. But then, as foundation leaders looked for more ways to communicate their message, they learned that less than a half-dozen real women are depicted by statues on display in publicly accessible places in major cities. “You hear that stat, and you just never look at statues the same way.”

“You might have purple hair and dive with sharks, or you’re a beta engineer for songs on Spotify.”

A few of the ambassadors are also registered with Nepris, an online group connecting professionals with teachers, homeschool groups, and students.

“The idea is to have a Zoom call with the expert to have the questions directly,” Makins said.

The ambassador program also partners with other organizations, including PBS and the Geena Davis Institute, for Mission Unstoppable. The television show will start its second season in January and continue to educate and demystify STEM for children.

“I think the notion is to open up our hearts and minds of young girls to A: that these careers exist and B: that they’re relevant, that they’re social, that being a STEM professional does not mean that you have an old white lab coat in a basement working alone. You might have purple hair and dive with sharks, or you’re a beta engineer for songs on Spotify,” Black said. “It’s about opening up and making it more visible that these things even exist. You need to see it and see yourself reflected in the job to even be able to consider to pursue them.”

Learn More: Visit ifthencollection.org to read more about the IF/THEN Ambassadors and the IF/THEN Collection.

Check out more from our 2021 STEAM Special Section