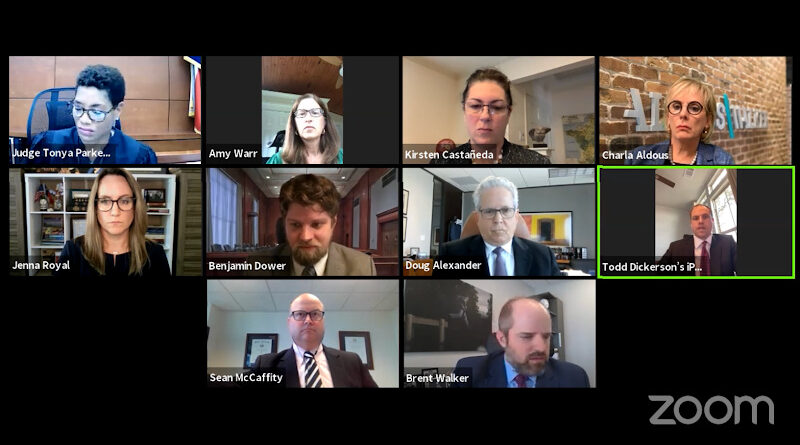 UPDATED to include information on Dallas County’s new orders, as well as reaction from state and local officials and parents.

A judge ruled Tuesday evening that Gov. Greg Abbott didn’t have the statutory authority to prevent Dallas County Judge Clay Jenkins from acting locally to mitigate the spread of COVID-19, and it looks like the county and Dallas ISD are not going to be alone in their effort to push back on Abbott’s executive order.

Judge Tonya Parker listened to arguments Tuesday afternoon from lawyers on both sides of the issue before issuing a temporary restraining order shortly after 8 p.m. Todd Dickerson and Benjamin Dower, attorneys for Abbott, argued that Jenkins’ attorneys  — Charla Aldous, Doug Alexander, and Brent Walker – were misinterpreting the sections of the law pertaining to the authority of the governor.

Walker and Alexander, who outlined the case for the TRO, argued that the law clearly delineated the limitations of the governor’s role in disaster response and subsequent case law backed them up.

The two sides argued as to whether Abbott’s order constituted a “necessary action” to answer the threat of the pandemic, and whether Abbott could prevent a local government from taking action during a disaster.

“The citizens of Dallas County have and will continue to be damaged and injured by Governor Abbott’s conduct,” Parker’s order reads. “Judge Jenkins cannot be precluded from implementing the mitigation strategies he believes are sound, reliable, and backed by scientific evidence.

“Under the Texas Disaster Act, County Judge Jenkins is vested with authority to issue orders to protect the safety and welfare of Dallas County citizens, which includes among other mitigation strategies, the option to mandate face coverings and masks in public.”

Late Tuesday evening, Jenkins indicated that a new order would be forthcoming Wednesday.

By Wednesday, Jenkins signed an order that requires childcare and pre-K through 12 schools to develop and implement a health and safety policy that includes “at a minimum” universal indoor masking for all staff, students, and teachers, regardless of vaccination status, except for children two and younger.

The order has similar requirements for commercial entities. “Failure to develop and implement the Health and Safety Policy required by this Executive Order within three (3) calendar days following the Effective Date may result in a fine not to exceed $1,000 for each violation,” the order reads. “Any peace officer or other person with lawful authority is hereby authorized to enforce the provisions of this Order in accordance with the authority granted under the Texas Disaster Act of 1975.”

Masks are also required in county buildings. Face masks are encouraged for public indoor spaces. There are no civil or criminal penalties if you don’t wear one in public spaces.

“It’s a fast-evolving situation, but we don’t have some number on a chart,” Jenkins said, adding that they’re following CDC guidance to determine what threshold should be met to rescind the order. “As our enemy advances, we’ll have to make some changes.”

But this is not the last word — the case will very likely end up in appellate court. Attorney General Ken Paxton has already filed for injunctive relief on behalf of the state, arguing that the law supports Abbott.

“The Texas Legislature made the Governor — not some patchwork of county judges and city mayors — the leader of the State’s response to a statewide emergency,” Paxton wrote in his application. “Local officials like Defendant Jenkins must recognize the fact that they are not above the law.”

“I think what can happen … they’ll have a variety of appellate maneuvers they will take, and we’ll just have to wait and see what happens,” Jenkins said Wednesday.

The city of San Antonio indicated Tuesday that if Arteaga issued the order, it would enact a mask mandate soon after.

Both restraining orders have a limited shelf life — Arteaga’s order is pending a hearing Monday, and Parker’s order will remain until a hearing on Aug. 24.

Alexander, who was on hand to answer questions at the Wednesday press conference, said the TRO should give the county about 13 days of masking before it comes before the court.

“The case is set for a temporary injunction hearing on Aug. 24,” he said, explaining that “whoever is unsuccessful has the right to appeal,” first to an appellate court, and then to the Texas Supreme Court.

“So yes, it could be a mask on, mask off situation, dependent on the outcomes,” he said. “If things proceed as they normally should, nothing should happen between now and Aug. 24.”

Jenkins said that during a call with school superintendents, someone brought up the same worry — that students could be subjected to a situation where masks were required one day, and not the next, repeatedly.

“Before I could answer, another superintendent said, ‘So what, these are kids, they’re going to do what we ask them to do. If they’re told they have to wear a mask in September and all of October, they will,'” he recalled.

Dallas ISD has had no incidents or confrontations over its policy, he added. “And I think that will be how it will play out for businesses, too,” he said.

“Hey, I don’t like it. I don’t like in the heat of Texas having to wear a mask on my face,” Jenkins continued. “But I much more don’t like getting COVID and spreading it to others, even if I’m vaccinated.”

On Wednesday, one parent who had joined a lawsuit from 12 parents told reporters that masks keep her medically fragile daughter safe.

“My daughter happens to be one of the medically fragile children in this lawsuit,” she said, adding that virtual learning wasn’t working for her daughter.

“She profoundly physically disabled, but cognitively typical,” she said. Her daughter not only missed her friends, but virtual learning required someone to sit next to her daughter at all times to help her operate her iPad.

“We had a really successful year last year, and both she and her sister remained safe,” she said. Last year, masks were required.

“The text and structure of the Disaster Act strongly suggest that the special powers the governor has during a disaster declaration must be exercised to actually respond to the declared disaster,” he wrote. “The act allows a governor to suspend certain statutes, for example, only if compliance with the statute ‘would in any way prevent, hinder, or delay necessary action in coping with’ the disaster.

“It might be reasonable for a governor to seek to impose some uniformity on disaster measures. But the Disaster Act shouldn’t be read to allow a governor to declare a disaster, only to focus his newly acquired powers on preventing local governments from dealing with that disaster,” he continued. “Temporary mask requirements for schools are sensible as a way to help address the serious threat from the delta variant, especially given that elementary school-aged children are too young to receive the vaccine.”

“We are all working to protect Texas children and those most vulnerable among us, but violating the governor’s executive orders — and violating parental rights — is not the way to do it,” he said in a statement.

Wednesday afternoon, Jenkins reiterated that he didn’t see people who see masking as an affront to their civil liberties as the enemy.