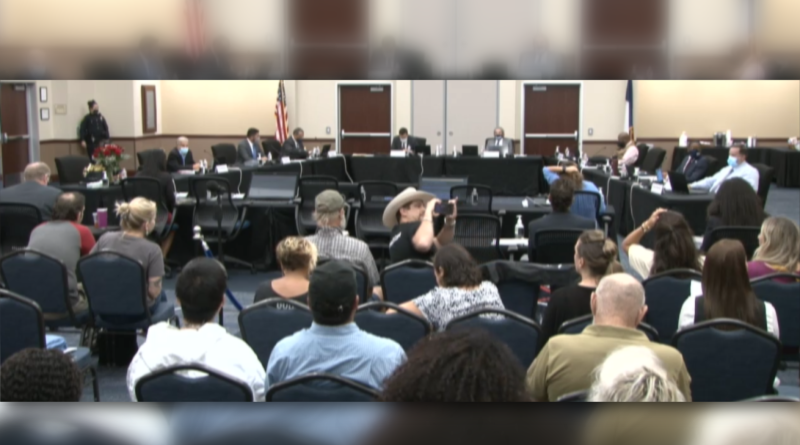 Dallas ISD’s potential discussion about joining a lawsuit filed against Gov. Greg Abbott was on the agenda, but before the board could even really begin its meeting Thursday night, there was a bit of a confrontation.

Several showed up for the meeting, which first had observers and those signed up for public comment seated in rows of chairs parallel to the board’s tables and behind tables where district staff generally sit to answer questions from the board.

But then it became clear that many in the crowd not only didn’t have masks on, but they had also intentionally arrived to protest the district’s mask mandate and refused to put them on.

Board president Ben Mackey gaveled the meeting into session and promptly reminded everyone in attendance that district policy required mask-wearing on all district properties while indoors.

He was promptly greeted with a chorus of “screw you” and “nope,” as well as several shaking heads from the unmasked in attendance.

The board then went into a planned closed session to discuss joining the lawsuit filed by La Joya ISD, as well as ratifying superintendent Michael Hinojosa’s mask mandate, angering those gathered, who were asked to clear the room by Dallas ISD police.

“We’re here for a reason,” one person said.

“We pay you – you work for us,” one woman shouted on her way out.

Dallas ISD trustees do not receive a salary.

While the board met with attorneys, district staff worked to set up an alternate means of taking public comment, ultimately setting up a separate room and allowing commenters to come in one by one to a microphone set up in the room, with their comments live-streamed into the board room and onto a TV in the lobby of the Turney W. Leonard Governance and Training Center.

Those who came to protest the mask mandate were not pleased with the changes, with many insisting that it was “cowardly” and “dismissive” for the board not to allow them to talk to them face to face.

While commenters came in to speak, the chants of “Let us in!” could be heard.

“This is the definition of medical tyranny,” said Michelle Reed who, like many who spoke against the mandate, did not provide the area of Dallas she lived in. “Our kids need oxygen.”

Most commenters stated that the mortality rate for pediatric cases is low in the county, and cited mask studies they say show the practice harms children.

“It is our constitutional right for our children to breathe fresh air!” another commenter said.

“These vaccines are deadly,” she said, adding that the trustees were “threatened by freedom fighters.”

Another commenter said he was a father of four Dallas ISD students, and that his children are “going to a school without smiles.”

In tears, another mother insisted angrily that students who didn’t wear masks were being mistreated at school.

“At Dealey school, they’re ostracizing children for not wearing masks,” she insisted. “We have documentation of this.”

But not every speaker was against the mask mandate. Several teachers took to the microphone to thank the board and Hinojosa for their efforts.

“These people are sent here intentionally to cause chaos,” one teacher said.

Hope Lee told the board she is in her 22nd year as a teacher at Dallas ISD and thanked Hinojosa and the board for “following the science and mandating masks.”

She said she was reminded of the late Sen. John Lewis’ words when she thought of the district’s mandate.

(Read: Our ongoing coverage of the pandemic)

“I’m so proud that the district I work for finds themselves in some good trouble at this time,” she said.

“I’ve never been prouder of the district for sticking up for us,” Diane Birdwell, another teacher, said. “The science does back the wearing of masks, even if these guys don’t.”

Before the board voted on whether to ratify Hinojosa’s actions and add the district to the suit against Abbott, board members also had praise for Hinojosa, and for the Dallas ISD police that provided crowd control.

“Thank you for taking a stand for the students, the staff, and the public,” said Trustee Joyce Foreman. “I am supporting you 100%.”

Trustee Justin Henry said that while the whole evening may have “looked peaceful on the screen,” many of the people who came to the meeting Thursday “were not here to do the business of the kids.”

With no discussion other than to move and second the motion to put the matter up for a vote, the trustees voted 9-0 to ratify Hinojosa’s mandate and to file litigation regarding the district’s decision to temporarily require masks.

On Aug. 11, La Joya Independent School District trustees voted to file a lawsuit against Abbott and the state of Texas over the ability of the district to make local decisions regarding student and staff health and safety. Since then, several other districts, including Fort Worth ISD, have joined the suit.

08.13.2021 Petition in Intervention La Joya by PeopleNewspapersDallas on Scribd