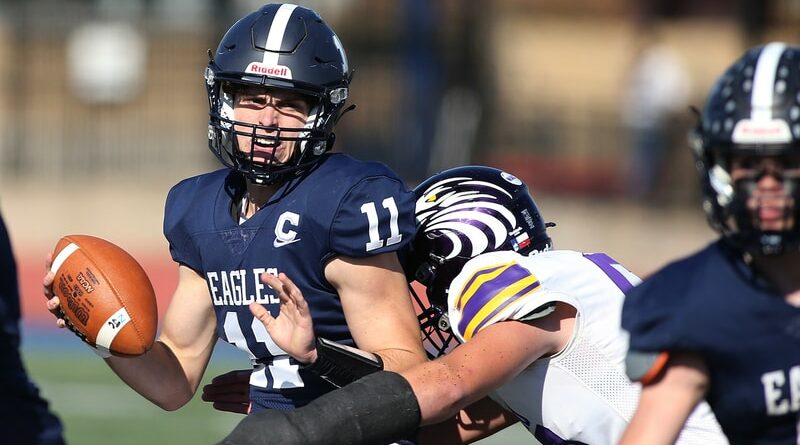 After a year of reaching unprecedented heights, ESD fell short of the summit at the SPC football championship game on Saturday.

The Eagles battled through injuries but couldn’t answer a second-quarter barrage by Houston Kinkaid during a 42-17 defeat at Postell Stadium.

Kinkaid (9-2) avenged a regular-season loss to previously unbeaten ESD (10-1), which was seeking its first SPC title since 2014 and its first ever in the large-school classification.

“We were a little banged up, but this is one of the toughest and hardest-hitting teams I’ve ever been a part of,” said ESD head coach Richard Williams. “They set a new bar for the ESD football program just by getting here.”

Dillon Bell had a touchdown rush, a touchdown reception, and a touchdown pass in a six-minute span as the Falcons took control just before halftime. Bell, who is verbally committed to Georgia, finished with 148 rushing yards on 22 carries with two scores, while adding 89 receiving yards. His younger brother, Micah, ran for another 120 yards.

ESD dual-threat quarterback Patrick Burke suffered an ankle injury on the second play from scrimmage. The junior continued to play with a noticeable limp and led the Eagles on a pair of first-half touchdown drives.

After scoring just 21 points in the first meeting between the teams on Oct. 8, Kinkaid struck for 22 in the final five minutes of the first half on Saturday. The Falcons scored more points than any ESD opponent all season — and they did so in the first two quarters.

Meanwhile, ESD never regained momentum while committing five turnovers. That included a drive that reached the Kinkaid 3-yard line before ending on a fumble. In terms of total yardage, the Falcons outgained the Eagles by a ratio of more than 2-to-1.

David Capobianco threw for 219 yards and three scores for the Falcons, who secured their 31st SPC football crown — far more than any other school in the league. Cameron Henry had 102 receiving yards including a 50-yard score on the opening possession of the second half.

The Eagles countered Kinkaid’s first two touchdowns with scoring drives of their own, the first of which came after a fumble recovery by Jaden Robinson at the Kinkaid 35.

Shortly after a 41-yard run by Andrew Carrie, Burke connected with Adam Russell on a short touchdown toss. Although his rushing ability was compromised, Burke surpassed 2,000 passing yards for the season.

ESD sophomore Collin Nicholson ran for a 77-yard touchdown early in the second quarter and finished with a team-high 94 yards on 15 attempts.

“It’s one of the largest senior groups we’ve ever had. Their leadership was top-notch,” Williams said. “We’ll just continue to build our program and look forward to the future.”