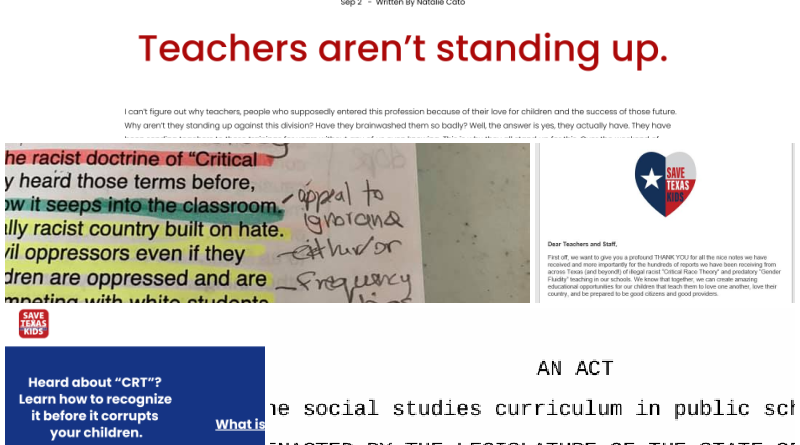 And not long after, incidents bubbled up in several school districts, including Dallas ISD where teachers received an email from Save Texas Kids, urging them to report instances where they felt they were being encouraged to teach CRT.

“Unfortunately, I know that many school districts will disregard this law which is why we need your help,” the letter’s author, Natalie Cato, wrote.

The organization’s website focuses on whether schools are teaching CRT, and discussions around gender identity.

“If you have evidence of racially sensitive subject matter being taught at any level in Texas schools, we need to know. All submissions will be kept private with names redacted, and privacy intact,” the site says.

“Recently, we’ve been seeing several ‘woke’ school board members here in North Texas speaking about racial ‘equity’ and gearing up to ensure that in the 2021-2022 school year, YOUR children will be inundated with messages equaling CRT teachings,” the site warns in a blog post.

After Texas Attorney General Ken Paxton asked interested parties to submit briefings on whether CRT and anti-racism education violate the Equal Protection Clause of the Fourteenth Amendment, Title VI, and the equal rights guarantee of the Texas Constitution, Texas Appleseed — along with the Lawyers Committee for Civil Rights Under Law and the NAACP Legal Defense and Educational Fund did just that, arguing that social and emotional learning, anti-racism education, and even CRT do not violate the constitution.

“These efforts, among others, are critical to addressing long overdue educational inequalities for underserved students of color.”

The bill, in fact, was aimed at social studies classes, and says that a “teacher may not be compelled to discuss a widely debated and currently controversial issue of public policy or social affairs.” It doesn’t ban teaching controversial topics, per se — it says that teachers must “explore that topic objectively and in a manner free from political bias.”

“I am worried about individuals and organizations attempting to use the bill to target teachers and educators and attempt to bully them through fear and intimidation, even if what they’re being targeted for isn’t addressed in HB 3979.”

With that backdrop, one AP language teacher at Booker T. Washington High School for the Performing and Visual Arts opted to use Cato’s email to teachers to help her students learn how to parse passages for their lessons on logical fallacies, cognitive biases, and rhetorical analysis.

HB 3979 pertains to social studies courses only, not English/language arts.

When Cato caught word of the teacher’s lesson, she fired off another missive to teachers, identifying the teacher as Melody Townsel, and urging Dallas ISD to terminate her for “illegally teaching CRT.”

“We want to mention one such teacher at Dallas Independent School District, Melody Townsel, for not only slandering members of our group but also appearing to violate Texas law through her admitted instruction of illegal Critical Race Theory,” Cato wrote. “Specifically, she made an assignment out of reading and critically analyzing our letter from last month.

“We are thick skinned, and don’t mind criticism. But this was not criticism. This was a clear attempt to indoctrinate children with a political ideology. The assignment had the clear insinuation that students should harshly critique the content of our message.”

One of her students said Cato’s characterization couldn’t be further from the truth.

“We’ve been working on argumentative essays, so when this letter came out, it happened to go perfectly with what we were learning,” the student, who asked to remain anonymous, said. “We reviewed the STK letter and first highlighted all of the rhetorical precis used throughout the essay. This helped us better understand rhetorical precis and how they can have a large impact on persuading people.

“After highlighting, we viewed the rubric we used to grade our own argumentative essay and graded the STK kids, based on writing skills only. In fact, I learned a lot from this lesson.”

The student said that Townsel is respected and loved by her students.

“Ms. Townsel is a very dedicated teacher. She always tries her best to make AP LANG an enjoyable class and plans daily activities that keep us engaged,” the student said. “She is always listening to what her students have to say and is always open to hearing feedback. She truly cares about all of their students and she’s a teacher that I can speak to without fear of judgment.

“Since she had a child previously attend Booker T., she really understands what this school is like. Overall, she’s a very empathetic teacher, who’s devoted to making learning fun.”

One teacher’s union says Cato and Save Texas Kids were wrong to single Townsel out, and wrong to send the initial email, too.

“They’re putting a target on our teachers,” said Alliance AFT president Rena Honea.”This will have lasting impacts on so many people for so many years and I think that may be one of the ways they think they can control or keep control of everything with their money and their power.

“And unfortunately, it works a lot but it doesn’t have to work every time.”

“Governor Abbott and Texas Republicans have put a target on teachers’ backs,” he said. “They were warned by experts, educators, historians, and parents of the ramifications that would stem as a result of passing classroom censorship policies.

“On top of an already challenging year for so many educators, Governor Abbott continues to exacerbate the uncertainty felt in Texas schools. This is anti-democratic and un-American,” he added.

“I, like many people across the state and country, are worried about HB 3979 and the chilling effects it aims to have on an appropriate and accurate public education,” said Dallas ISD school board president Ben Mackey. “While I believe the SEL and DEI work being done in Dallas and in many places across the state and nation isn’t actually impacted by this bill, I am worried about individuals and organizations attempting to use the bill to target teachers and educators and attempt to bully them through fear and intimidation, even if what they’re being targeted for isn’t addressed in HB 3979.”

“That said, I am proud of the work that Dallas ISD has done over the past years and will fully support Dallas ISD’s continued efforts to becoming a more equitable and effective school district for all of our students.”

The request to have Townsel fired didn’t sit well with her students, either.

“I was startled to see that they were trying to fire Ms. Townsel,” her student said. “Once I heard about this news, I immediately had a family conversation about the situation and we all agreed it was wrong. I was very upset to hear this news because Ms. Townsel is one of my favorite teachers I’ve ever had and AP LANG is my favorite class, which isn’t something I’d normally say about an AP class.”

Ultimately, though, the student said that Save Texas Kids may need to do their research about Booker T. Washington.

“Booker T is a very diverse school. So many people such different backgrounds come to this school and that’s what makes it such a special place,” the student explained. “Booker T is a school that is accepting of everyone and constantly does its best to make students feel safe and comfortable in the building.

“This school is very passionate about treating everyone equally, so I think STK needs to do more research on Booker T’s history before creating letters like this, because this is not what Booker T. is like.”