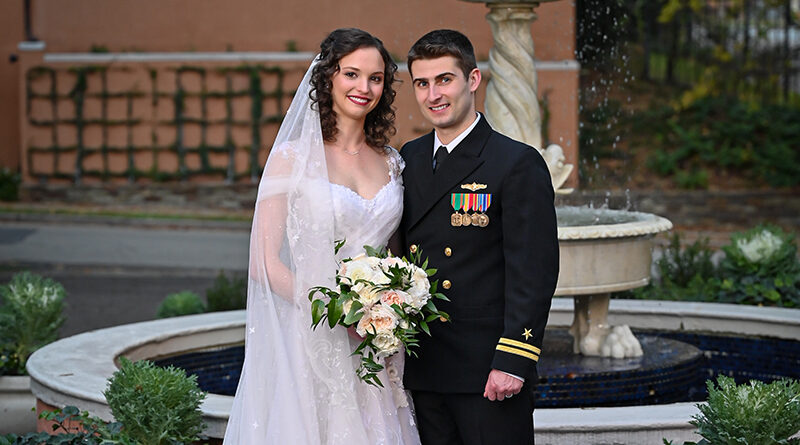 Given in marriage by her father, the bride wore a custom bridal gown designed for her by Michael Faircloth. A sweetheart neckline in front contrasted with a deep “V” neckline in the back. Numerous layers of tulle swathed the fitted bodice and draped across her shoulders in gentle folds. Releasing from the fitted waist were layers of tulle cut in a circular fashion. Delicate hand beading and Chantilly lace appliqué embellished the bodice and skirt in an organic floral and vine motif. The bride requested to further customize her gown, with personal touches hidden within the floral embroidery. Two embroidered love birds alighting on an anchor reflected the groom’s service in the US Navy and gently referenced the bride’s maiden name.

The bride complemented her gown with an heirloom bridal veil of Brussels lace, which she borrowed from the groom’s family. The lace was brought from Brussels by Tower’s great grandparents, Grover and Marian Bullington, in the 1960s. They had three children, and from those three children, they had a total of 10 granddaughters and no grandsons. Each family received a piece of lace to use as wedding veils. Before Tiffany, Tower’s aunt, Jeanne Tower Cox, wore the veil.

Dana Conner of Artistry by Dana Conner did the bride’s hair and makeup. Ms. Conner smoothed out Tiffany’s curly hair, keeping the curls as natural as possible, and provided elegant yet natural makeup, complementing the glowing bride’s overall look.

The newlyweds welcomed their family to a cocktail reception and dinner in a private room of The Rosewood Mansion following the wedding ceremony. Florals by Park Cities Petals and music from the quartet created a dreamy, romantic ambiance for the entire evening. Small floral arrangements of various shades of white, blush, and accents of deep burgundy, delicate greenery, candles, and bold, large high florals lined the tables. The luscious garland framing the mantle of the fireplace created a stunning backdrop behind the bride and groom when they were seated for dinner. Sarah Hobbs from Park Cities Petals did not miss a single detail as she created warmth and intimacy with the arrangements throughout the rooms of the ceremony and dinner reception. The couple’s first dance was to “Unchained Melody” by Alex North, performed by the string quartet. Next, the father/daughter dance was a waltz to “Stars Over Texas” by Tracy Lawrence, and the mother/son dance was to Frank Sinatra’s “I Wish You Love,” both arranged by Sammy Davenport for the quartet.

Photographer James Edward and videographers Ted Bangs and Brad Evans captured the wedding ceremony and the reception for the newlyweds.

Tiffany is a 2012 graduate of Trinity Christian Academy. After graduation, she pursued a professional ballet career. Tiffany spent a year in Salt Lake City with Ballet West, then two years with Ballett Dortmund in Dortmund, Germany, and then five years with Národní divadlo Brno Balet (the ballet of the National Theater of Brno) in Brno, Czech Republic. She received a Bachelor of Business Administration degree in Business Management, graduating Magna Cum Laude from Dallas Baptist University in 2019. She also completed a graduate studies course in International Diplomacy at Oxford University in 2021. Tiffany is currently pursuing her master’s degree in Cultural Mediation and Intercultural Communication from SMU.

Tower graduated from St. Mark’s School of Texas in 2012. He then attended Texas A&M, where he graduated Magna Cum Laude in 2016 with a major in Political Science and minors in History and Russian. During his time in College Station, Tower was also a member of The Corps of Cadets and Phi Beta Kappa and was director of the Freudian Slip Improv Troupe. After college, he received his commission as an officer in the US Navy in 2016. For three years, Tower was stationed in Point Mugu, California, deploying twice to the South China Sea aboard the USS CARL VINSON and USS THEODORE ROOSEVELT, making the first port call by an aircraft carrier in Vietnam since the Vietnam War. Currently, he is stationed at RAF Molesworth in the United Kingdom with USAFRICOM.

The newlyweds will make their home in Cambridge, England, near Tower’s base. 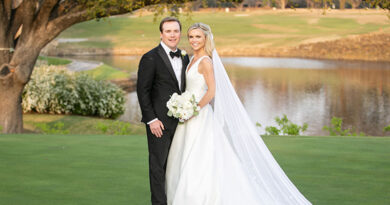