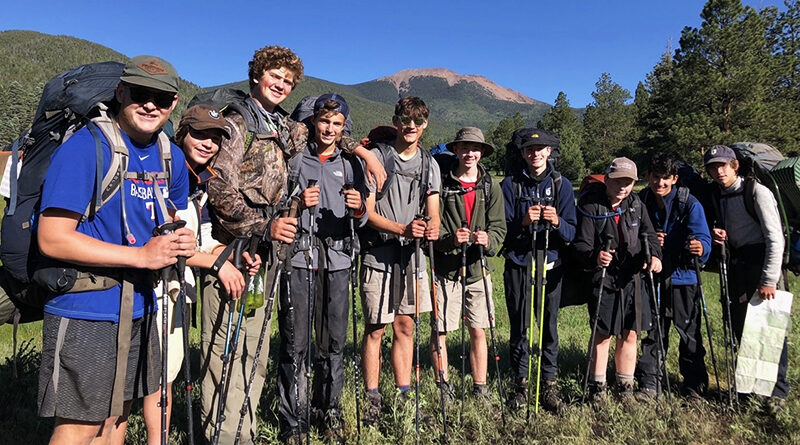 I had the pleasure of taking part in June 2021 as 10 crew members and two advisors (scoutmasters) from University Park’s Boy Scout Troop 70 formed crew 622-U-02 at Philmont Scout Ranch, a premier BSA high adventure destination in New Mexico.

We chose a harder trek, and it rained every day.

Hiking 8 to 10 miles daily for 11 days, the crew soldiered on despite the conditions, tallying more than 100 miles and summiting Baldy Mountain at an elevation of 12,441 feet.

We also completed a service project in Carson National Forest, learning a lot about the prevention of forest fires while spending the day cutting underbrush to help prepare for a controlled burn.

I also learned a great deal about the history of Philmont and the souls that roamed the land throughout time. Along the way, we discovered remnants from old gold mines, happened on old cabins, and learned about settlers and how they lived.

The day we summited Baldy Mountain was one of the hardest and best.

The crew started from Camp Copper Park on the first sunny day we had seen, but the wind and clouds ascended as we hit the top of the ridgeline, making it almost unbearable.

We considered heading back down but persevered through after hiding behind trees for about 15-20 minutes to let the wind die down.

We made it to the top, and it was worth it. The views were breathtaking.

Scoutmasters John Dubiel and Phil Lamberson were impressed and complemented our leadership and cooperation.

Going to sleep and waking to rain and knowing you would be putting on cold, wet socks and cold, wet boots for an 8+ mile hike in the mud takes a lot.

“Everyone knew they had a job to do, and no one complained,” Dubiel said. “They helped each other whether requested or not. They just got the job done every day. Perhaps most impressive was the mental toughness they exhibited. Going to sleep and waking to rain and knowing you would be putting on cold, wet socks and cold, wet boots for an 8+ mile hike in the mud takes a lot.”

I can now boast that I was able to live for 11 days on only what my crew and I could carry.

Each of us carried about 50 pounds in gear. We ate only dehydrated food and chlorinated and purified all our water.

Parts of the trip were miserable, but I am very proud of how well we all worked together and that we did it. It was an accomplishment and trip of a lifetime.

Highland Park High School junior Noah W. Lilly and other members of Scout Troop 70 began training for their June 2021 trip in February. They took several hikes, camped twice to practice living on only what they could carry, and hit the stairs at Cityplace Tower.