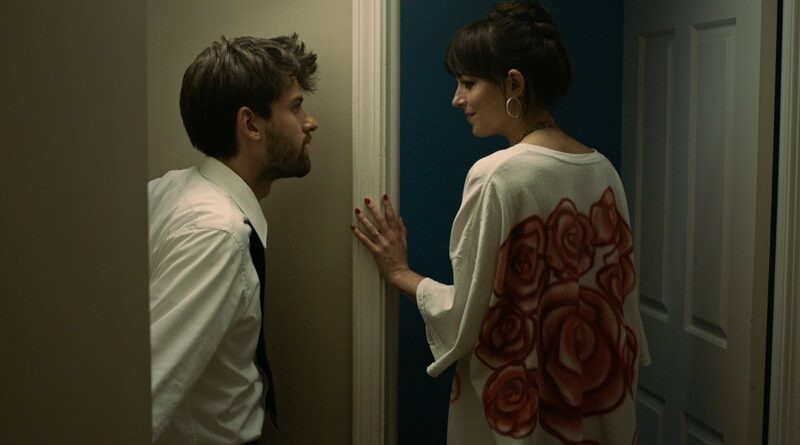 So when Raiff finally got his chance to experience an in-person festival at SXSW this year, the 25-year-old Greenhill graduate soaked it all in — from the red carpet and post-screening Q&A session in front of a rapturous audience at the Cha Cha screening, to attending other events as a fan.

“It was a full-circle moment. It was a great relief,” Raiff said. “It was also my first time to see the movie in a theater with people and experience it with them.”

Like his low-budget debut, Raiff’s new drama has semiautobiographical roots. He plays a disillusioned college graduate living at home in New Jersey while facing an uncertain future. He works a fast-food job and moonlights as a party-starter at bar mitzvahs for his younger brother’s friends. That enables him to meet Domino (Dakota Johnson), a devoted single mother with an autistic daughter (Vanessa Burghardt), and gives him a new perspective on adulthood.

The idea began with Domino, a character loosely based on Raiff’s own mother. She is the primary caretaker for his younger sister, Andrea, who suffers from a congenital condition known as holoprosencephaly, which leaves her unable to walk or talk.

“After a certain amount of time, I started developing a pitch in my head,” Raiff said. “I had just made S—house, about this person that was me, basically. What if I told the story of this mom through the lens of a person I know best, which is a 22-year-old dumbass?”

The bar mitzvah angle came from Raiff’s middle school days at Greenhill, when he became a regular attendee at celebrations for his Jewish classmates.

“It didn’t mean anything to me until seventh grade. It seemed like I went to a party and a service every Saturday. I had my first kiss at a bar mitzvah, too,” he said. “I was going to set it in Dallas, but people don’t think of a bar mitzvah movie as being set in Dallas.”

Instead, he set the film in New Jersey and shot it last year in Pittsburgh. Raiff originally intended only to direct the film before being talked into the starring role by Johnson (Suspiria), who makes her debut as a producer alongside former Netflix executive Ro Donnelly.

“He really trusts his instincts in the most beautiful way. I think that’s why his work is great,” Johnson said following the SXSW screening. “When he speaks to you, it’s extraordinarily authentic and hyper-intelligent.”

The teenage girl is played by newcomer Burghardt, who is on the autism spectrum herself and inspired conversations that shaped the character in meaningful ways, Raiff said.

“I’ve known I have wanted to be in films since I was about 12. But I’m past shy — I go mute sometimes when I get really excited or really stressed, and that’s kind of hard when you go to auditions,” Burghardt said. “So I didn’t get any auditions before this but I’ve always wanted to do it.”

Raiff won’t write or star in his next film, which is based on the true story of a scandal-ridden minor-league hockey team from Connecticut. David Harbour (“Stranger Things”) is attached as the lead.

That will mark another step up in budget and scope for the filmmaker, mirroring the difference between his rookie effort and the more polished Cha Cha Real Smooth, which opens on Friday in theaters and on Apple TV+.

“It was a huge learning curve,” Raiff said. “There were so many people on the set. There were Teamsters there.”