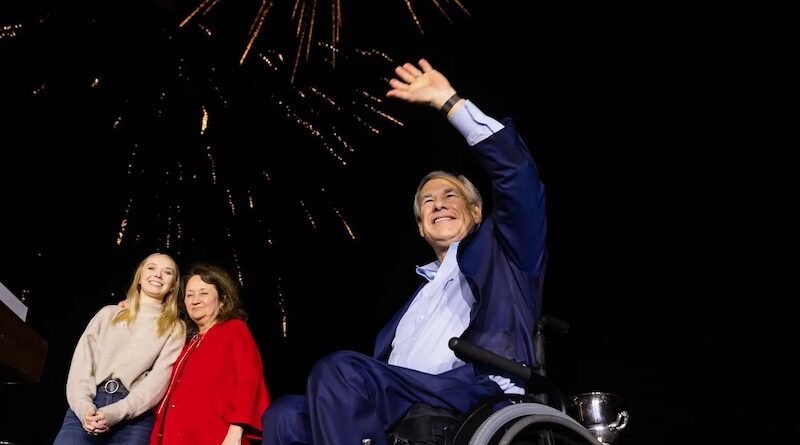 By Patrick Svitek, The Texas Tribune

Abbott, 64, a former state attorney general and Texas Supreme Court justice, faced his toughest opponent yet in O’Rourke, who repeatedly outraised the incumbent and broke a state fundraising record. But Abbott campaigned relentlessly on border security and capitalized on national headwinds favoring the GOP by tying O’Rourke to President Joe Biden, who is unpopular nationwide but especially in Texas.

O’Rourke sought to make the race a referendum on Abbott’s dramatic second term, emphasizing the grid failure and arguing Abbott had become too extreme on issues like guns and abortion. Both the Uvalde massacre and overturning of Roe v. Wade bolstered O’Rourke’s case, as Abbott resisted any new gun-control measures and his near-total abortion ban took effect.

Abbott largely ignored those issues as he campaigned more on the border, the economy, and public safety. And he regularly reached back to comments that O’Rourke made during and around his unsuccessful 2020 presidential campaign, arguing O’Rourke showed he was too liberal for Texas.

Get the data and visuals that accompany this story →

O’Rourke officially launched his challenge to Abbott in November 2021, but the race had been long expected. The governor spent months prior rallying the state’s Republicans against O’Rourke, painting him as too liberal for Texas after his unsuccessful 2020 presidential run.

Once politically unknown statewide, O’Rourke made himself the state’s top Democrat through his near-miss loss to U.S. Sen. Ted Cruz in 2018. His White House bid that followed did not gain as much traction, but it led to him adopting positions to keep pace with the leftward bend of the primary.

The stance that would define his White House bid came after the 2019 Walmart shooting in his hometown of El Paso. O’Rourke emerged from the tragedy with a proposal to mandate buybacks for assault weapons, declaring at one debate, “Hell yes, we’re going to take your AR-15, your AK-47.” Republicans said the comment would doom any political future O’Rourke had in gun-loving Texas.

O’Rourke was also looking at a much different political environment in Texas than he was in 2018. Scarred by persistent GOP attacks, O’Rourke’s favorability rating was upside down in polling, and he was facing the first midterm under a new Democratic president who was deeply unpopular in Texas.

O’Rourke did not renounce his support for the buyback proposal as he began his campaign against Abbott, but he centered his campaign on less polarizing issues in the initial stretch. At the top of the list: the 2021 power grid collapse that killed hundreds of Texans.

O’Rourke went on a statewide road trip in February to mark the one-year anniversary of the grid failure. Abbott had insisted that everything that needed to be done to fix the grid was passed during the 2021 regular legislative session. But O’Rourke argued the measures did far too little, proposing that the state connect to the national grid, among other things.

Also in February, Abbott megadonor Kelcy Warren sued O’Rourke for defamation over his criticism of the $1 million donation that Warren gave Abbott after his pipeline company reaped windfall profits from the power crisis. O’Rourke held a news conference in March to publicize the lawsuit, vowing to not back down, and it remains pending to this day. Abbott’s campaign has denied any role in the lawsuit.

O’Rourke easily won his primary in early March, though Abbott faced a more competitive contest. He ultimately prevailed with two-thirds of the vote, but he spent months shifting to the right on issues like abortion and guns as he faced challengers including former state Sen. Don Huffines and former Texas GOP Chair Allen West.

As the official Democratic nominee for governor, O’Rourke gave fellow Democrats hope that he had learned from his 2018 campaign. He was not hesitating to criticize Abbott after pulling punches against Cruz, and he pledged to be more of a team player for the party.

It was not long until gun control was again at the center of O’Rourke’s platform. On May 24, a gunman opened fire at Robb Elementary School in Uvalde, killing 19 students and two teachers and injuring 17 others.

A day after the rampage, O’Rourke angrily interrupted Abbott’s news conference in Uvalde, telling him he was “doing nothing” to prevent gun violence. O’Rourke was ultimately escorted out.

Abbott initially praised the law enforcement response to the shooting, saying it “could have been worse” if officers had not been there. But it soon became clear that the response was deeply flawed, with officers waiting on-site for over an hour before breaching the classroom where the gunman was holed up. Abbott said he had been misled as O’Rourke continued to lay blame for the carnage on the governor.

A Quinnipiac Poll released the next month found the race was tightening, with Abbott’s lead down to 5 percentage points.

With the state still reeling from the Uvalde massacre, another history-making event arrived in June: the U.S. Supreme Court decision overturning Roe v. Wade. The ruling energized Democrats everywhere but had especially high stakes in Texas, where Abbott had already signed a “trigger law” guaranteeing an automatic, near-total abortion ban if the high court ever reversed the landmark decision. O’Rourke jumped into action to show how extreme the law was, emphasizing its lack of exceptions for rape and incest victims.

After the Quinnipiac survey, O’Rourke got good news in mid-July when campaign finance reports were released for a period starting in February. O’Rourke had outraised Abbott, $27.6 million to $24.9 million, a once-unthinkable feat given Abbott’s reputation as a prodigious fundraiser. And O’Rourke’s fundraising set a new record: the most money ever raised by a candidate for state office in a single reporting period. Abbott still ended the period with nearly twice as much cash on hand, but O’Rourke’s haul made Democrats newly optimistic that he had a shot against the governor.

It was on the heels of the Uvalde shooting and Roe v. Wade ruling that O’Rourke launched his most ambitious barnstorm yet: a 49-day road trip throughout Texas.

It was a throwback to O’Rourke’s go-anywhere campaign four years earlier. It produced plenty of moments of O’Rourke finding common cause with Republicans in rural Texas, which his campaign aggressively pushed out on social media. And it led to one particularly memorable town hall where a protester laughed as O’Rourke was discussing the Uvalde shooting, describing the impact of an AR-15.

As O’Rourke ramped up his travel, Abbott kept a laserlike focus on one issue: the border. He had already dispatched thousands of National Guard troops there, started construction of a state-funded border wall and instituted a brief commercial vehicle inspection policy that clogged ports of entry for days.

But in April, Abbott upped the ante by beginning to bus migrants to Democratic-run cities, a program that escalated as the summer went on. First he sent the buses to Washington, D.C., then to New York City and Chicago. Most recently, he’s been directing buses directly to Vice President Kamala Harris’ residence in Washington.

As summer began to turn to fall, it seemed like O’Rourke was having an impact. Abbott was giving confusing answers when asked about the abortion law’s lack of rape and incest exceptions. At the same time, near-weekly developments were coming about the errors of law enforcement in Uvalde, including from the state police, whose director, Steve McCraw, was an Abbott loyalist.

Abbott’s campaign launched its first TV ads in mid-August, somewhat early for an incumbent. And the spots appeared aimed at softening his image after the two most rocky years of his governorship.

It took O’Rourke over three weeks to match Abbott on air, but his first ad showed the issue that he was betting big on. The spot featured a couple — a Democratic wife and a Republican husband — agreeing that the abortion ban was too extreme.

In late September, Abbott and O’Rourke had their first and only debate, despite O’Rourke’s pleas for multiple meetings. It was contentious but mostly predictable, as Abbott tried to tie O’Rourke to President Joe Biden and hammered him on the border, while O’Rourke sought to put Abbott on defense over abortion and Uvalde.

As early voting neared, a raft of polls gave Abbott a clear — but not overwhelming — lead over O’Rourke.

On TV, Abbott had started running negative ads against O’Rourke, including about comments he made in 2020 praising racial-justice protesters who had been pushing to “defund the police.” O’Rourke said he did not support that as he campaigned against Abbott.

But at the same time Abbott started assailing O’Rourke on air, the Democrat was getting huge help from a new group called Coulda Been Worse LLC. The group was set up to conceal the source of its funding — commonly known as “dark money” — and quickly pumped millions of dollars into the race, airing ads that painted a dystopian picture of Texas under Abbott. O’Rourke said he did not know anything about the group and called on it to voluntarily disclose its donors, but it never did.

O’Rourke’s campaign itself was not lacking for money. He continued to outraise Abbott on the final two major campaign-finance filings before the election. And he erased Abbott’s cash-on-hand advantage, another achievement that once seemed a tall order.

Both candidates largely eschewed big-name surrogates in the final weeks of the race. Abbott skipped a Robstown rally with former President Donald Trump, citing an out-of-state fundraising trip. For the most part, O’Rourke did not call in any national names until the day before the election, when former President Barack Obama did a robocall for O’Rourke.

Disclosure: Walmart Stores Inc. has been a financial supporter of The Texas Tribune, a nonprofit, nonpartisan news organization that is funded in part by donations from members, foundations and corporate sponsors. Financial supporters play no role in the Tribune’s journalism. Find a complete list of them here.

The Texas Tribune is a nonprofit statewide news organization dedicated to keeping Texans informed on politics and policy issues that impact their communities. This election season, Texans around the state will turn to The Texas Tribune for the information they need on voting, election results, analysis of key races and more. Get the latest.

This article originally appeared in The Texas Tribune at https://www.texastribune.org/2022/11/08/greg-abbott-beto-orourke-texas-governor-race/.

The Texas Tribune is a member-supported, nonpartisan newsroom informing and engaging Texans on state politics and policy. Learn more at texastribune.org.