Highland Park ISD officially called its November bond election with a unanimous vote at last night’s board meeting. Side note: it was superintendent Tom Trigg and communications director Jon Dahlander’s first official board meeting in their respective roles.

Board trustees thanked the facilities committee and the public for their work, patience, and engagement throughout the planning process. But they wanted the public to know this is just the beginning.

“This is absolutely the right thing to do,” board president Joe Taylor said. “At the end of the day, this is about the kids. The work is not over.”

“We’re not finished yet; we’re moving on,” trustee Jim Hitzelberger said. “It’s [about] the people, not the buildings.”

Three commenters voiced their concern regarding the possibility of Section 8 housing during public comments, both for and against. Of course, there are no plans at this time for Section 8 housing to enter the HPISD borders.

Trustees addressed yet another common concern of the public: maintaining the historic element of existing buildings.

“We take it to heart,” trustee and finance committee chair Kelly Walker said.

The unanimous vote means that the $361 million bond proposal will be up for approval from voters on Nov. 3. As many know, the plans include rebuilding Bradfield, Hyer, and University Park elementary schools and renovating the four other district campuses. For more information, click here. FAQ can also be found here.

The meeting also included preliminary bond election analysis by RBC Capital Markets. Managing director Matthew Boles gave an overview of possible impact on tax base. He admitted that the company intentionally estimates conservatively in order to prepare for higher interest rates in the future. He also added that the firm anticipates HPISD’s AAA credit rating will be preserved.

“We err on the side of conservatism,” Boles said. “You have an existing debt service that has been very well managed.”

He anticipated that tax rates of homeowners would not be impacted in the first year of the bond, but in the second. HPISD also has a bond counsel with Bracewell and Giuliani.

As an additional note: HPISD has changed how they operate public comments. Instead of dividing public comments between agenda and non-agenda related items, public comments will be grouped into one time allotment. Each speaker will still have three minutes. 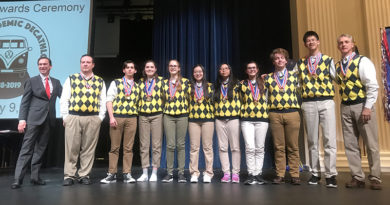