If Highland Park lost its edge during the last couple games of the regular season, the Scots found it in time for the playoffs.

The Scots used one of their sharpest performances of the season to dominate Irving Nimitz 38-12 in a Class 6A Region II bi-district game on Friday at Highlander Stadium.

With its winning streak at nine games, HP next faces a rematch with Waco Midway, who eliminated the Scots last season, in the area round at 2 p.m. on Nov. 21 at AT&T Stadium.

A resurgent passing attack led by Henry Allen allowed HP to build a commanding lead against the Vikings. Allen was 19-of-25 for 269 yards with five touchdowns, including two apiece to J.T. Dooley and Chris Buell.

“We preached all week about beating them to the punch, and we did a great job,” said HP head coach Randy Allen. “Henry and our receivers were on, and I think they’ll have confidence going into next week.”

The next possession ended with a 28-yard pass from Henry Allen to Jack Toohey and a 14-0 lead. Henry Allen completed his first 11 throws before his first miss early in the second quarter, and the passing yardage total was his highest since a win over Prosper on Sept. 12.

Following an interception by Turner Rejebian on a tipped pass deep in HP territory, the Scots marched down the field again, and Henry Allen found Dooley on a rollout from 19 yards away. The HP defense stopped Nimitz on downs near midfield, and Henry Allen went back to work, hitting Buell on a 10-yard strike for a 28-0 lead midway through the second quarter.

The Vikings (6-5) appeared to gain momentum with two interceptions in a three-minute span late in the first half. Noah Spears returned the first one to the HP 9-yard line. However, Nimitz didn’t capitalize, as the Scots made a goal-line stand that ended with a Matthew Barge fumble recovery in the end zone.

“I thought that was the best that our defense has played in the first half all year,” Randy Allen said. “We started a lot faster than we’ve been starting on both sides of the ball.”

In the second half, the Scots padded the lead with a 12-yard scoring strike from Henry Allen to Buell and a 27-yard field goal by Grayson Borrego.

Without starting quarterback Joe Pena, the Vikings weren’t left with many offensive options outside of Mark Eugene. He was a workhorse with 32 carries for 222 yards, but most of those yards came on two long touchdown runs in the fourth quarter, when the game already was out of reach.

“Our offense kind of feeds off Mark, and Highland Park did a great job of taking him out of the game,” said Nimitz head coach Brian Rogers. “We had a hard time getting him going early.”

It was the second consecutive season in which HP eliminated Nimitz in the first round. The Vikings haven’t won a playoff game since 2002.

Now the Scots turn their attention to Midway, which topped Garland 41-20 on Friday to advance. The Panthers (8-3), who topped HP 35-28 in the same round last year, have won eight straight games after starting 0-3 in nondistrict play. 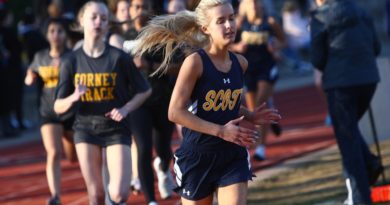