Highland Park might have been in a different classification last season, but it ran into the same stumbling block.

The Scots were eliminated in the regional quarterfinals for the third consecutive season — twice in Class 5A and once in 6A. There aren’t many teams around the state that can boast that type of consistency, but HP is ready to move on.

“It’s kind of a hump that we want to get over. Hopefully this group of kids can get there,” said HP head coach Travis Yoder. “It’s a successful season if you go three rounds, but these kids always want to go one more.”

In their second and final season at the 6A level, the Scots will try to clear the third-round hurdle with a roster that lacks significant varsity experience.

HP lost eight seniors, including standouts Layne Looney, Jon Skidmore, and Matthew White, who have each moved on to the college level.

“We had a lot of good leaders last year,” Yoder said. “This year we’ve got a lot of young guys with little varsity experience, but they’re stepping up and working hard. I’m really impressed with their work ethic.”

Such inexperience obviously presents some challenges, but Yoder said the young players are eager to prove themselves.

“When you lose so many starters, it’s hard to rebuild. I think we’re going to surprise people,” he said. “If we can fly under the radar a little bit and outwork people, then I think you’re going to see a lot of wins.”

The Scots likely won’t have a lot of power in the lineup, so they will look to manufacture runs with situational hitting and smart base running. Yoder said HP might need to lean on its pitching and defense to win some low-scoring games.

“We’re going make contact and put pressure on the defense and be aggressive on the bases,” Yoder said.

The nondistrict schedule is difficult, starting with high-profile tournaments in Houston and McKinney. The District 10-6A schedule gets underway in late March.

Yoder said in order to survive such a gauntlet, the Scots will adopt a blue-collar boxer mentality. They might not have a huge knockout punch but will wear you down with steady jabs.

“It will put our feet to the fire a little bit, but I think their confidence is going to grow,” he said.

Homecoming Queen Nominees to be Introduced at Home Game 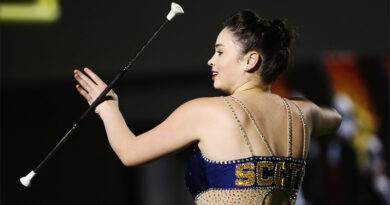 Whirling, Twirling, Fly in The Air