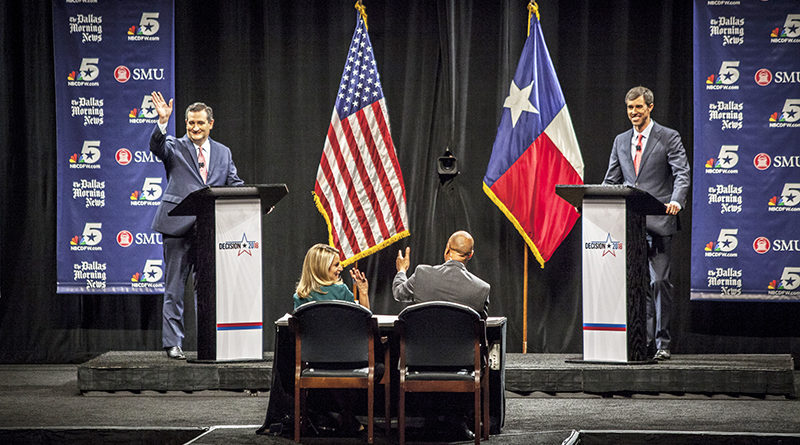 The university hosted the first U.S. Senate debate between Republican incumbent Ted Cruz and Democratic challenger Beto O’Rourke some weeks ago, but SMU’s role in political discussions doesn’t stop there.

When local, state, and even national journalists seek analysis of Lone Star electoral trends, SMU faculty members are often the ones providing the answers to questions ranging from how energized are religious voters to whether a high-interest U.S. senate race means reliably Republican Texas is ready to turn purple.

“This race shows that a good Democrat candidate in a good Democrat year can come close, even in Texas,” said Cal Jillson, professor of political science. “It does not show that Texas is about to become a competitive two-party state. That interesting day is still a decade or two away.”

SMU introduces Jillson, author of Lone Star Tarnished: A Critical Look at Texas Politics and Public Policy, as one of the foremost, and often-interviewed political experts.

But he’s not the only SMU faculty member offering up analysis on the upcoming election. Here are a few others:

Matthew Wilson: Associate professor of political science
On what will decide the Cruz- O’Rourke race: “The swing constituency will be suburban moderate Republicans. Can O’Rourke convince enough to split their ticket? The challenge for him is to win a senate race when the Democratic candidate for governor is likely to lose by double digits.”

Stephanie Martin: Assistant professor of communication studies
On O’Rourke’s message: “He’s really trying to leverage Cruz’s overall unlikability. You just look at O’Rourke’s campaign message, ‘Texas deserves better’ . . . Texas is doing well – it’s prosperous, and its economy and growth are strong. But some of the biggest black eyes that have happened the past two years in the Trump administration have happened right here, with the biggest being border separations.”
On Cruz’s message: “Most of what I’ve seen from Cruz is claims that Beto is ‘not Texas’. . . He’s trying to tag Beto as something that is not authentic to the Lone Star State, but I don’t think it will be enough of a message because O’Rourke has shown himself to be very charismatic and very present throughout his campaign.”

Rita Kirk: Director of the Maguire Center for Ethics & Public Responsibility
On what O’Rourke must do: “He also has to provide people a reason not to go in and just vote straight party GOP because Texas is inundated with straight party voters.”
On what Cruz must do: “Solidifying the Republican base and getting them to vote straight ticket and solidify his strength in urban areas will win him the election.”

Digg’s Taco Shop to Open by End of Month