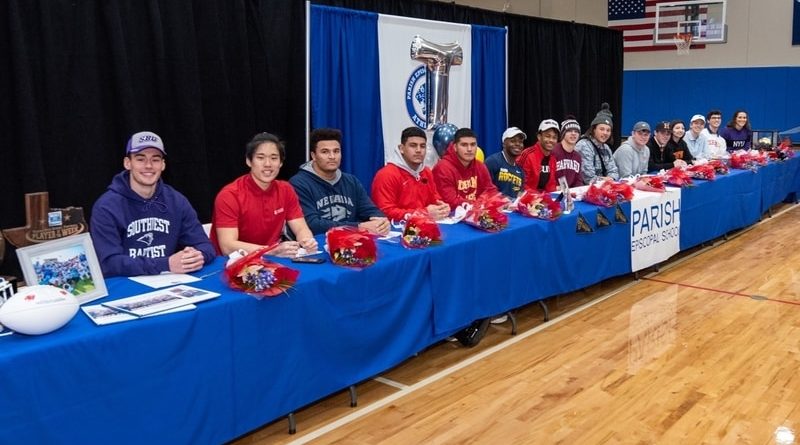 They were among 11 football players — and 15 athletes total — honored during a National Signing Day ceremony on Wednesday in the school’s gymnasium.

“I’m glad, but it hurts to see them go,” said Parish football coach Daniel Novakov. “We thank them for leaving a lasting legacy. They gave us the ride of a lifetime.”

Lynch, a standout running back for the Panthers, originally planned to sign with Colorado State before a late coaching change caused him to reconsider. After the title game, Toledo began to show interest, and Lynch gave his commitment after visiting the campus in Ohio in late January.

“I really liked the environment and the players,” said Lynch, who led Parish with 831 rushing yards and 12 touchdowns this season. “I felt a good vibe.”

Meanwhile, Overton figured he would have to take an offer from a lower-division school or enroll as a preferred walk-on. After he suffered a season-ending ankle injury the week before Parish’s playoff opener, his list of offers dwindled.

However, a week ago, he got a text from a Pac-12 assistant coach that had been in contact previously. Their program didn’t have any spots remaining, but his friend was the new defensive coordinator at Nevada, and needed some toughness along his defensive line.

Overton played defensive tackle during his junior season with the Panthers, but had switched to the offensive line as a senior. That didn’t matter to the Wolf Pack, who were impressed with his size (6-foot-4, 280 pounds) and past accomplishments.

He’s never been to the Reno campus, although he plans to visit this spring before heading there for good later this year.